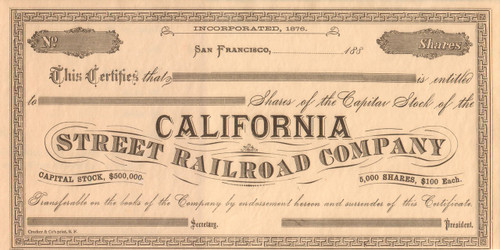 Ornately printed certificate, printed on light paper. Unissued and not cancelled. Circa 1880 from company records.  Dated 188_.

The company remained independent until 1951, outlasting all the other commercial streetcar and cable car operators in the city. The city purchased and reopened the lines in 1952; the current cable car system is a hybrid made up of the California Street line, and the Hyde Street section of Cal Cable's O'Farrell, Jones & Hyde line, together with other lines already in municipal ownership.

California's mild climate encouraged an innovative streetcar design first used on the California Street Cable Railroad about 1895. The cars feature an enclosed center section with open seating on each end of the car. These California type streetcars were subsequently adopted by many California electric railways, including Pacific Electric, Los Angeles Railway and San Francisco, Napa and Calistoga Railway.

The San Francisco cable car system is the world's last manually operated cable car system. An icon of San Francisco, the cable car system forms part of the intermodal urban transport network operated by the San Francisco Municipal Railway. Of the twenty-three lines established between 1873 and 1890, three remain (one of which combines parts of two earlier lines): two routes from downtown near Union Square to Fisherman's Wharf, and a third route along California Street. While the cable cars are used to a certain extent by commuters, the vast majority of their 7 million annual passengers are tourists. They are among the most significant tourist attractions in the city, along with Alcatraz Island, the Golden Gate Bridge, and Fisherman's Wharf. The cable cars are listed on the National Register of Historic Places.