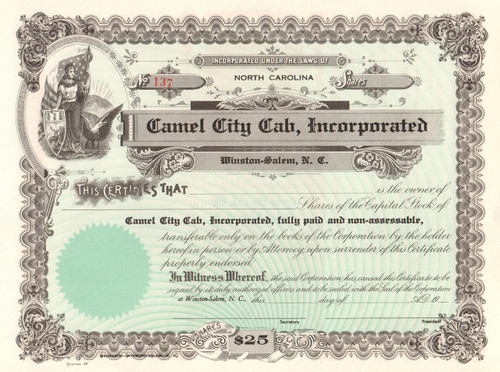 Very nice collectible piece with a great vignette of Lady Liberty with flag, shield, and eagle.  Unissued and not cancelled.  Circa 1972 from company records.

In 1938, the Safe Bus Company purchased controlling interest in the Camel City Cab Company, which was considered part of the transit operation. Camel Cab was a subsidiary through 1956.  Both companies were African American owned to provide cigarette workers transportation from neighborhoods where white-owned bus and taxi companies did not operate.

Safe Bus Company became the sole public transportation provider for Winston-Salem residents in 1968 when Winston-Salem experienced the loss of a transit system after City Coach Lines closed down and drove its buses out of town after a ten-month strike by its workers. The Winston-Salem Transit Authority was created as a result of the transit troubles. Under a North Carolina law, it is illegal for a municipal government to enter into collective bargaining with a labor union. However, city code, Article IV, Sec 23-146 allowed the establishment of the Winston-Salem Transit Authority, which could act on behalf of the city in the operation of a public transportation system.  In November 1968, Safe Bus entered into a franchise agreement with the Winston-Salem Transit Authority under which Safe Bus assumed the responsibility of providing service in the areas formerly served by City Coach Lines. The former general manager and fourteen drivers, of City Coach Lines accepted positions with Safe Bus as dispatcher and drivers, respectively.

Due to the expansion of the company from its high-density short haul service into less profitable sections of the city and the nationwide trend of the late 1960s and early 1970s toward increased ownership of private automobiles, Safe Bus began to encounter financial difficulties. Expectations in 1969 were high. The company immediately started making plans to woo the white passengers who were lost when City Coach went out of business. Twelve new air-conditioned, 45-passenger buses were purchased. Plans were made to improve the services by maintaining reliable schedules, all of this in hopes of giving their new patrons the best in public transportation. But the grass was not greener on the other side of the tracks.

By 1971, Safe Bus found itself in the red by a $270,000.00 deficit. The company was only able to attract 40% of City Coach’s passengers. This forced Safe Bus to deadhead over a large land area. Of the 14 routes picked up from City Coach, only six brought in any meaningful revenue, and the other eight routes drained profits. Safe Bus met resistance from people who had contempt for any business owned and operated by Blacks.

A special referendum was passed in 1972 and with the help of a federal grant; the city of Winston-Salem purchased the assets of the Safe Bus Company. The Camel City Cab Company was spun off as another business but dissolved by the late 80's due to competition.

Winston-Salem is a city in and the county seat of Forsyth County, North Carolina, United States. It is the second largest municipality in the Piedmont Triad region and the fifth largest city in the state. Winston-Salem is home to the tallest office building in the region, 100 North Main Street, formerly the Wachovia Building and now known locally as the Wells Fargo Center.

"Camel City" is a reference to the city's historic involvement in the tobacco industry related to locally based R. J. Reynolds Tobacco Company's Camel cigarettes. Winston-Salem is also known for its traditional furniture company. Many locals refer to the city as "Winston" in informal speech. "The Dash" is referenced from the hyphen between Winston and Salem and was popularized by the nickname of the local minor league baseball team, the Winston-Salem Dash. In 2012, the city was listed among the 10 best places to retire in the U.S. by CBS Money Watch.

Camel is a brand of cigarettes that was introduced by American company R.J. Reynolds Tobacco in the summer of 1913. Most current Camel cigarettes contain a blend of Turkish tobacco and Virginia tobacco. Early in 2008 the blend was changed as was the package design.

n 1913, R.J. Reynolds developed an innovation: the packaged cigarette. Most tobacco users who smoked cigarettes preferred to roll their own, and there was thought to be no national market for pre-packaged cigarettes. Reynolds worked to develop a flavor he thought would be more appealing than past products, creating the Camel cigarette, so named because it used Turkish paper, in imitation of then-fashionable Egyptian cigarettes. Reynolds undercut competitors on the cost of the cigarettes, and within a year, he had sold 425 million packs of Camels.

Camel cigarettes were originally blended to have a milder taste in contrast to brands that, at the time of its introduction, were considered much harsher. They were advance promoted, prior to official release, by a careful advertising campaign that included "teasers" which merely stated that "the Camels are coming"[1] (a play on the old Scottish folk song, "The Campbells Are Coming"). This marketing style was a prototype for attempts to sway public opinion that coincided with the United States' entry into World War I, and later World War II. Another promotion strategy was the use of a Circus camel, 'Old Joe', which was driven through town and used to distribute free cigarettes. The brand's catch-phrase slogan, used for decades, was "I'd walk a mile for a Camel!"