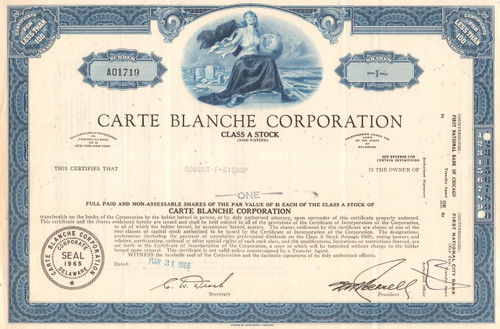 The 1960s- and 1970s-era Carte Blanche cards were considered more prestigious worldwide than their competition, the American Express and Diners Club cards, though its small card member base hindered its success. Carte Blanche was the first to implement a "Gold Card" program, as a means to recognize cardholders who were frequent users and paid their bills on time. In 1981, Citicorp acquired the Diners Club card, and by the mid-1990s the Carte Blanche card was being phased out in favor of Diners Club.

The origin of the company came from a French phrase. "Carte blanche" (literally white/blank card) is defined complete freedom to act as one wishes or thinks best.  From the late 17th century: French, literally ‘blank paper’ (i.e., a blank sheet on which to write whatever one wishes, particularly one's own terms for an agreement).