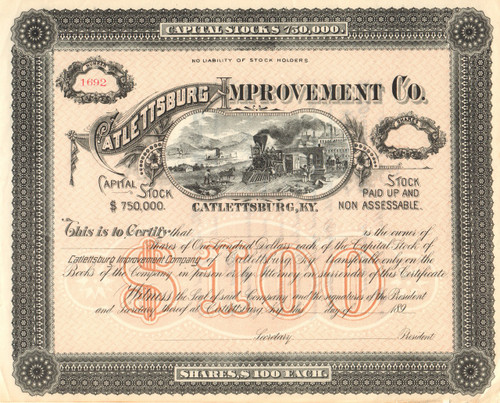 Nice rail collectible.  Very nice vignette of an older steam train with industrial background and river scene with paddle wheelers. Nice under print of the share value $100. Unissued and not cancelled. Dated 189_.

Incorporated 1890's in Catlettsburg KY with an initial capitalization of $750,000, the company raised money for land improvements for rail lines in the area. While original money was intended for street railway enhancement, later monies sought to capture major railroad company business.

Catlettsburg KY was situated along the Ohio River, just west of Huntington WV. Rail transportation began to slowly replace the river's prominence as a mode of transportation as the Chesapeake & Ohio (C&O) railroad began construction of a bridge across the Big Sandy River linking Catlettsburg with Kenova, West Virginia in 1885. The bridge is still traversed by trains many times each day, as a part of CSX Transportation's (formerly C & O Railway) main operations. Known by railroad enthusiasts and historians from around the world, it is unique in design and historic value for its longevity.  The bridge is also used by Amtrak's Cardinal passenger train, train numbers 50 (eastbound, toward Huntington) and 51 (westbound, toward Ashland), which carries passengers from Chicago to New York City. The Chatteroi railroad preceded the C & O by a few years as the first rail line to travel through Catlettsburg's city limits, as it followed the Big Sandy River north from the coal fields to Ashland.

The Chesapeake & Ohio Railway built a passenger depot in Catlettsburg in 1906 and operated the facility for over 52 years until 1958 when passenger service was transferred to nearby Ashland. After closing the facility, C & O sold it to the city of Catlettsburg for $1. The city has maintained it and used it as a civic center since that time. In 2006, longtime Catlettsburg businessman and politician Russell Compton donated his own personal funds for the restoration of the train depot so it could be restored to its original appearance. Intensive restoration of the depot is now complete, featuring the original directional signage, etc. The facility was renamed the Russell Compton Community Center in 2007 in his honor. In 2010, Compton donated the necessary funds to restore an old C & O caboose to its original appearance. It is now parked on the side of the depot facility.