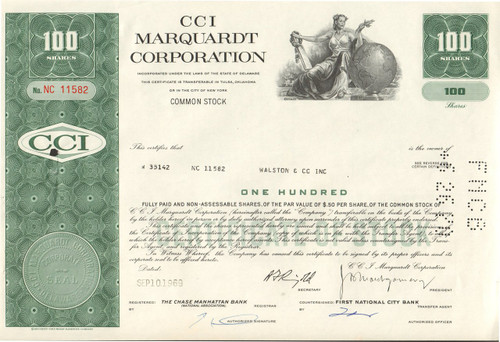 Unusual rocket manufacturer stock cert with a nice vignette of a Greek goddess figure seated next to a globe of the Earth. issued and cancelled. Dated 1969-1970.

Marquardt Corporation was one of the few aeronautical engineering firms that was involved in the development of the ramjet engine. Marquardt designs were developed through the 1940s into the 1960s, but the ramjet never became a major design and the company turned to other fields in the 1970s.

Roy Marquardt was an aeronautical engineering graduate from CalTech who had worked at Northrop during World War II on the B-35 flying-wing bomber project. While working on problems cooling the engines, which were buried in the wings, he found that the heat generated by the engines produced useful thrust. This started his interest in the ramjet principle, and in November 1944 he started Marquardt Aircraft in Venice, California.

By this point the company had outgrown its Venice plant, but had no money to fund a larger factory. Marquardt then sold a controlling interest in the company to General Tire and Rubber Company in 1949, and used the funds to move to a new site in Van Nuys. However the purchase wasn't a happy one for General Tire due to management differences, after making only 25% return in one year, they agreed to sell their share of the company to another investor. Eventually such an investor was found, and General Tire sold their stake to Laurence Rockefeller in 1950.

By this point Marquardt was truly hitting its stride. In the early 1950s supersonic cruise missile projects for various roles were quite common, and the ramjet was the most "natural" powerplant for these systems. Many of them were designs to be shot down as target drones, or simply crash or explode at the end of their mission, so simplicity and low cost was as important as high-speed performance. By 1952 Marquardt was involved in a number of projects, including the Navy's Rigel missile, the Air Force's X-7 high-speed radio control test aircraft, and the BOMARC anti-aircraft missile.

Over the next few years the X-7 missile would break record after record, and led the Air Force to award Marquardt with the contract for the BOMARC missile engines. The initial contract was for 1,500 engines, but the Van Nuys plant wouldn't be able to build them fast enough. Eventually the Air Force and Marquardt opened a new plant just outside of Ogden, Utah, on the shores of Great Salt Lake. The plant was officially opened in June 1957, and delivered their first engines a month ahead of schedule. By 1958 the engine was in full production, leading to an additional engine contract from the Air Force for an equally large run of a more advanced version.

By 1959 the company had sales of $70 million, and had purchased several smaller aerospace firms. One of these purchases, Power Systems, led to a number of designs for small rocket motors used as positioning thrusters. This would eventually become one of Marquardt biggest product lines in the 1960s. Another new product line started with the introduction of their first ram-air turbine, small air-powered generators for providing aircraft with electrical power if the main engine failed. With this diversification came a change in name, to Marquardt Corporation.

By 1970 Marquardt was known primarily as "the" company for small rocket engines and thrusters. Practically all US space vehicles and satellites used their designs, eventually including a major win for the Space Shuttle program. The market for ramjet engines had largely disappeared by this point due to increased performance from normal jet engines, but Marquardt continued low-level development on advanced designs.

In 1983 the company was purchased by the ISC Defense and Space Group. Unknown at the time, ISC was heavily involved in illegal arms dealing, selling advanced US weaponry to anyone with enough money. Through the 1980s ISC sold cluster bombs to both Israel and Iraq, 1,500 laser guided bombs to Iraq, and electronics for nuclear development to South Africa, all with the full knowledge of the CIA.

In 1987 ISC was purchased by Scotland-based Ferranti, but soon after the merger Ferranti started to realize that ISC had been "cooking the books". They declared bankruptcy in 1991 and sued ISC's CEO, James Guerin. Guerin claimed he was doing this for the US government, but was disowned, and was eventually convicted and sentenced to 15 years for defrauding Ferranti of $1.1 billion, money laundering and illegal arms exports.

As a result of all of this, Marquardt was split in two. The Marquardt Jet Laboratory, building rocket thrusters, was sold to Kaiser Aerospace, while the Marquardt Manufacturing Company disappeared. Kaiser reportedly picked up Marquardt for a mere $1 million, with about $50 million in outstanding Space Shuttle contracts. Kaiser eventually closed the Van Nuys plant in 2001.