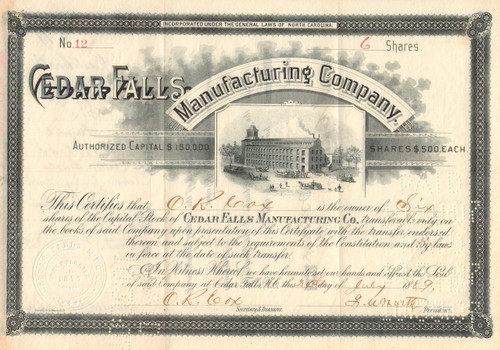 Great collectible piece with a great engraved vignette with the company cotton mill.  Issued and cancelled. Dated in the 1890's. Stub attached to the left from being pasted back into the ledger when redeemed.

The beginnings of the textile industry in North Carolina are generally traced to the building of the Schenck-Warlick Mill in Lincoln County in 1814. Cotton manufacturing grew slowly, with six mills established in the 1820s, twenty-five in the 1830s, and thirty-two in the 1840s. Randolph County, in the center of the state and the heart of the Piedmont textile belt, had five cotton mills in place by 1860, each of them water-powered and situated on the Deep River. The first of these was Cedar Falls Manufacturing Company, chartered by the state legislature in 1828 as “The Manufacturing Company of the County of Randolph.”

Jonathan Worth (1802-1869), North Carolina governor from 1865 to 1868, was chiefly responsible for securing the charter and remained a principal investor throughout his life. At the time of his death, he was president of the company. A subscription campaign followed the securing of the charter for his grist mill. The original frame building was replaced with a brick structure in 1846.

By the late 1850s the “Cedar Falls” name was known throughout the state due to astute marketing of the brand. During the Civil War the Cedar Falls mill was the state’s principal supplier of soldiers’ shirts and drawers. Once the Confederacy began conscription, Worth took steps to keep his mill employees out of the army, certifying that their work in Randolph was essential to the war effort. The mill escaped damage by Gen. William T. Sherman’s federal troops. Part of the antebellum factory survives to this day and is incorporated within a larger mill building.

he Cedar Falls Manufacturing Company was a Cotton Manufacturing facility. The original plant was built on the north side of the river near the bridge, and the machinery was shipped by rail to Greensboro and hauled by horse-drawn wagons to Cedar Falls. Manufacturing did not begin until 1836. The lower mill, was the one-story part to the present plant, was not built until 1895-96. It was a cotton weaving plant and equipped with 100 looms. During the early years the only power available was waterpower from the river diverted into a raceway leading under the plant to a huge water wheel. The motion of the wheel was conveyed to the plant by a system of ropes and pulleys which were connected to looms by leather belts.

The original company was established by an Act of the North Carolina General Assembly on the first day of February 1829, and was the first mill in Randolph County and one of the pioneer cotton mills in the south. Among the charter members of the new enterprise was Jonathan Worth, who later became Governor of North Carolina, and Jesse Walker, the great grandfather of T. Henry Redding and the great, great grandfather of C.W. McCrary, Jr., Steele Redding, and Mrs. John O Toledano.

Jonathan Worth, 1802-1869, who was the son of David Worth of Guilford County, North Carolina. He studied law under Archibald D. Murphy, married Martitia Daniel, and started practicing law at Asheboro, North Carolina, in 1825.

The company was acquired in 1916 by three Asheboro businessmen, D.B. McCrary, T.H. Redding and W.J. Armfield, Jr.. The company was almost bankrupt at the time of the acquistion. They adopted the name of Sapona Cotton Mills, Inc., after an Indian tribe that had dwelled on the shores of the Deep River many years ago.

Cedar Falls Manufacturing Co. built a second mill and dam in 1895 just a bit downstream of the first mill, and this was known as the lower mill.  In 1916 the company was foreclosed upon and reopened as the Sapona Cotton Mills. In 1939 the upper mill was sold to the Jordan and Odell families of Saxapahaw (J. M. Odell having learned the cotton mill business in this same mill as a young man); the lower mill was still operated as Sapona Manufacturing, specializing in synthetic yarns. Jockey underwear company bought the mill in the 1980s. Cedar Falls’ best-remembered period of management began in 1939, when Dr. Henry Jordan, brother of Senator B. Everett Jordan, bought the village.  In 1978 Jordan’s heirs sold the property to Dixie Yarns, Inc. The mill closed in the early 2000s and is now used to store textile machinery overflow from the American Textile History Museum.