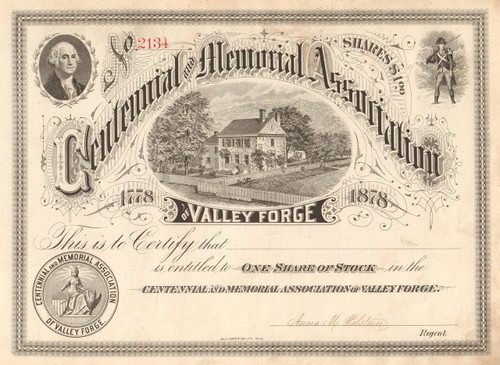 The Centennial Celebration and World's Fair held in 1876 is said to have touched off the Colonial Revival Movement. The fair did feature historical exhibits, but they generally served to glorify the present day by comparison. As another by-product of the Colonial Revival Movement, hundreds of historical associations were founded and more than fifty patriotic societies were formed.

The success of this first gathering held solely to commemorate the Valley Forge experience appeared to demonstrate that there was a tremendous interest in Valley Forge. As a result, the Centennial and Memorial Association adopted a charter formalizing their plans to purchase Washington's Headquarters, open it to the public, and create a memorial park. On July 5, 1878, the Centennial and Memorial Association was officially chartered to purchase, improve, and preserve the lands at Valley Forge General Washington used, together with the structures on them.  Anyone could join the Centennial and Memorial Association. A contribution of just $1.00 bought a membership, a vote, and a stock certificate suitable for framing.  Eventually President James A. Garfield's wife, Lucretia, and his daughter and mother each bought a share of stock.

Initial fundraising efforts were successful. By the spring of 1879, the association had collected $3,000 toward the purchase of Washington's Headquarters and had secured a mortgage for the remaining amount. On May 1, the association paid Mrs. Ogden's price and the deed to headquarters was transferred to William Holstein, who conveyed it to the association. The Centennial and Memorial Association had acquired its lasting memorial, plus about one-and-a-half acres of land.

Valley Forge was the military camp in southeastern Pennsylvania, approximately 20 miles northwest of Philadelphia, where the American Continental Army spent the winter of 1777–1778 during the American Revolutionary War. Starvation, disease, malnutrition, and exposure killed over 2,500 American soldiers by the end of February 1778. With winter almost setting in, and with the prospects for campaigning greatly diminishing, General George Washington sought quarters for his men. Washington and his troops had fought what was to be the last major engagement of 1777 at the Battle of White Marsh (or Edge Hill) in early December. He devised to pull his troops from their present encampment in the White Marsh area (now Fort Washington State Park) and move to a more secure location for the coming winter.

Valley Forge National Historic Park commemorates the perseverance, sacrifice, and strength of the soldiers, the Continental Army, and the generals that were present during the winter of 1777-1778. Originally private land, the site of the encampment became a Pennsylvania state park in 1893 and, on the July 4, 1976, it became Valley Forge National Historical Park. The modern park features historical and recreated buildings and structures; memorials; and a newly renovated visitor center, which shows a short film and has several exhibits. Washington Memorial Chapel was built in 1904 as a memorial to Washington and his army. An adjoining carillon of 58 bells represents all U.S. states and territories. It resides in a tower underwritten by the Daughters of the American Revolution.