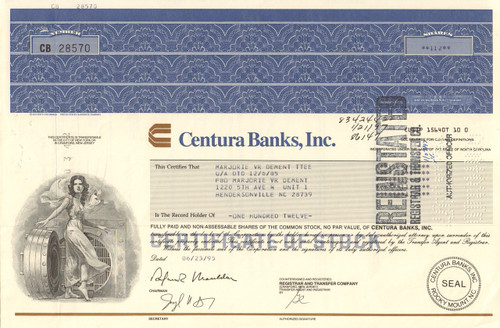 Nice banking collectible. Great side vignette of a classical female figure in front of an open bank vault.  Company logo to left of the company name. Issued and cancelled. Dated in the 1990's.

Centura Bank was a bank headquartered in Rocky Mount, North Carolina from 1990, when Peoples Bancorp and Planters Corp. merged, to 2001, when Royal Bank of Canada acquired the company and changed its name to RBC Centura.

In 1918, the headquarters of Rocky Mount National Bank, the historic district's tallest building, was built in Rocky Mount. In 1934, the bank changed its name to People's Bank and Trust. The People's Building served as the bank's headquarters until the mid-1970s. Peoples Bancorp had $1.26 billion in assets when the bank announced its merger in 1990.

Planters Bank started in 1899. Archie W. McLean served as the president and chief executive of Planters from 1950 until 1971, when he became chairman. When he retired in 1974, Planters was the state's tenth largest bank. In 1985, Planters had assets of $620 million and 52 locations in 19 communities in the eastern part of the state when it announced the $10.1 million acquisition of Bank of Pilot Mountain, with $50.9 million in assets and two locations. In 1990, Planters had $1.17 billion in assets.

A "merger of equals" created Centura Banks. Inc. in 1990 when two banks, Planters Bank and Peoples Bancorp, merged. In 1990, Centura had $178 million in market capitalization. In 1991, Centura took over Watauga Savings, and Citizens Federal Savings and Loan in Rutherfordton, North Carolina.

On January 26, 2001, Canada's largest bank, Royal Bank of Canada, announced a $2.3 billion deal to acquire Centura, which had $11.5 billion in assets and 246 branches. The bank's name would change to RBC Centura, and the headquarters would remain in Rocky Mount. On February 24, 2012 PNC bought out RBC Centura bank.