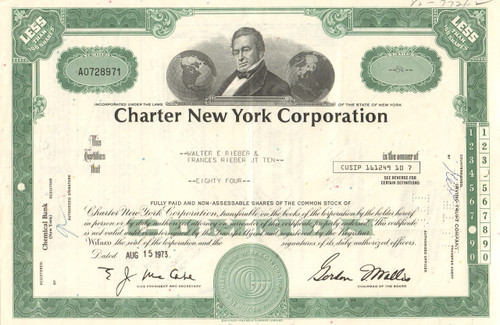 Incorporated 1962,  the company acted as a bank holding company with operations at One Wall Street New York.  Charter New York was renamed to Irving Bank Corporation in 1979. Irving Bank was acquired by the Bank of New York Company in 1990.

Washington Irving (April 3, 1783 – November 28, 1859) was an American author, essayist, biographer, historian, and diplomat of the early 19th century. He is best known for his short stories "Rip Van Winkle" (1819) and "The Legend of Sleepy Hollow" (1820), both of which appear in his book The Sketch Book of Geoffrey Crayon, Gent. His historical works include biographies of George Washington, Oliver Goldsmith and Muhammad, and several histories of 15th-century Spain dealing with subjects such as Christopher Columbus, the Moors and the Alhambra. Irving served as the U.S. ambassador to Spain from 1842 to 1846.