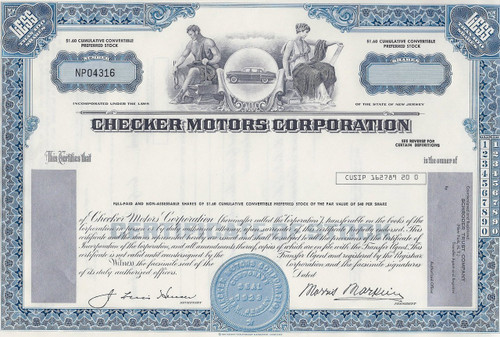 Wonderful stock certificate from the Checker Motors Corporation, famous makers of the Checker Cab. Amazing vignette features the iconic car flanked by two allegorical figures of industry and knowledge. The certificate is crisp and clean. Undated but circa . Four colors available for this piece but only one of each is available. Printed signature of Morris Markin as president, except on the brown certificate which carries David Markin as president.

Checker made the iconic American taxi cab which was valued by taxicab companies for its durability in heavy use. Special features included large rear seats and trunks. The company had trouble competing with fleet discounts offered by the larger manufacturers as well as economies of scale in procuring components. The final models were produced in 1982.

In 1989, Checker Motors and Checker Holding Company were involved in a reverse acquisition with International Controls Corporation (Great Dane Trailers), and the company later changed its name to CRA Holdings. The company was reorganized in 1995 into three wholly owned subsidiaries: Yellow Cab (owns and leases taxicabs in Chicago), Chicago Autoworks (taxi-cab repair and other services) and CMC Kalamazoo. Other subsidiaries include American Country Insurance Company, a provider of property and casualty insurance, Great Dane, (the largest manufacturer of truck trailers, containers and chassis), and South Charleston Stamping & Manufacturing Company. The company was renamed as Great Dane Limited Partnership, and was acquired by Chicago based CC Industries.

Purchased in August 1989, South Charleston Stamping was sold by Checker to Mayflower Corp. In November 1996. South Charleston Stamping had been owned previously by Volkswagen and supported Volkswagen automobile production in Pennsylvania in the late 70's. Checker Motors operated as a subsidiary of CC Industries as an automotive subcontractor, primarily for General Motors into the 21st century. Checker made body stamping for various GMC/Chevrolet truck lines and chassis components for Cadillac. David Markin, son of founder Morris Markin, continued to act as CMC Chief Executive Officer.

In 2008, due to the Late-2000s recession and high gasoline prices, sales at GM and other automakers plummeted. As a major supplier to GM, Checker saw its sales drop significantly. The company had net sales of $61 million in 2008 and projected 2009 sales of only $34.5 million, a decline of 43%. During the summer of 2008, Checker employed about 340 workers. While the US economy was in full recession, Checker Motors CEO David Markin fell victim to to the Ponzi scheme started and run by Bernie Madoff. David Markin's name appears five times on the official list of Madoff victims. One address on the list was 2016 North Pitcher Street, Kalamazoo, the same address as Checker Motors Corp.

On January 16, 2009, the 87-year-old Kalamazoo company filed in U.S. Bankruptcy Court in Grand Rapids, Michigan. Escalating raw material prices and dwindling sales for their customers' products were cited as the main reasons for the filing, but another reason was labor costs. It was reported that a deal with unionized labor could not be reached after a year of negotiations. At the time of the bankruptcy, Checker's customer base included General Motors, Chrysler LLC, Ford Motor Company, Navistar International and GM Shanghai. Checker was the eighth largest American auto supplier to go bankrupt in recent years. GM and Chrysler followed Checker's bankruptcy just several months later.

On January 16, 2009, the company filed for Chapter 11 protection in U.S. Bankruptcy Court.