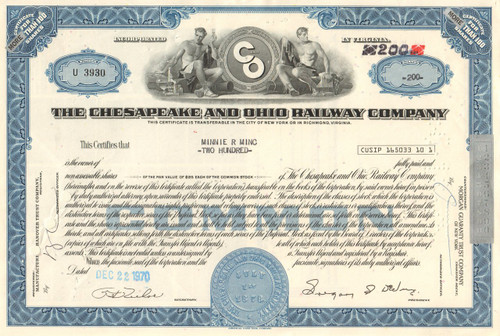 The Chesapeake and Ohio Railway was a Class I railroad formed in 1869 in Virginia from several smaller Virginia railroads begun in the 19th century. Led by industrialist Collis P. Huntington, it reached from Virginia's capital city of Richmond to the Ohio River by 1873, where the railroad town of Huntington, West Virginia was named for him.

Tapping the coal reserves of West Virginia, the C&O's Peninsula Extension to new coal piers on the harbor of Hampton Roads resulted in the creation of the new City of Newport News. Coal revenues also led the forging of a rail link to the Midwest, eventually reaching Columbus, Cincinnati and Toledo in Ohio and Chicago, Illinois.

By the early 1960s the C&O was headquartered in Cleveland, Ohio, USA. In 1972, under the leadership of Cyrus Eaton, it became part of the Chessie System, along with the Baltimore and Ohio and Western Maryland Railway. The Chessie System was later combined with the Seaboard Coast Line and Louisville and Nashville, both the primary components of the Family Lines System, to become a key portion of CSX Transportation (CSXT) in the 1980s. A substantial portion of Conrail was added in 1999.

C&O's passenger services ended in 1971 with the formation of Amtrak. Today Amtrak's tri-weekly Cardinal passenger train follows the historic and scenic route of the C&O through the New River Gorge in one of the more rugged sections of the Mountain State.

The Chesapeake & Ohio Railway traced its origin to the Louisa Railroad of Louisa County, Virginia, begun in 1836, and the James River & Kanawha Canal Company, also begun in Virginia in 1785. The first train ran on December 20, 1837. Originally a feeder line to connect with the predecessor of the Richmond, Fredericksburg and Potomac Railroad (RF&P) at what is now Doswell, by 1850 the Louisa Railroad had won the right in Virginia courts to build southeast to Richmond in competition with the RF&P. It also expanded west, reaching Charlottesville. In keeping with its new and larger vision, it was renamed the Virginia Central Railroad. However, plans to cross the Blue Ridge Mountains, the first mountain barrier to the west, at Swift Run Gap proved both financially and technically unfeasible.

The Commonwealth of Virginia, always keen to help with internal improvements not only owned a portion of Virginia Central stock through the state Board of Public Works, but incorporated and financed the Blue Ridge Railroad to accomplish the hard and expensive task of crossing the Blue Ridge Mountains. Under the leadership of the great early civil engineer Claudius Crozet, the Blue Ridge RR built over the mountains using four tunnels: Greenwood Tunnel, Brookville Tunnel, Little Rock Tunnel, and the 4,263-foot Blue Ridge Tunnel at the top of the pass, then one of the longest tunnels in the world.

At the same time, Virginia Central was building westward from the west foot of the Blue Ridge, crossing the Shenandoah Valley and Great North Mountain, finally reaching the foot of the Alleghany Mountains in 1856 at a point known as Jackson's River Station, later to be called Clifton Forge. To finish its line across the mountainous territory of the Alleghany Plateau, the Commonwealth again chartered a state-subsidized railroad called the Covington and Ohio Railroad, authorized by the General Assembly in 1853.

Following the Civil War, Virginia Central officials, led by company president Williams Carter Wickham, realized that they would have to get capital to rebuild from outside the economically devastated South, and attempted to attract British interests, without success. Finally they succeeded in interesting Collis P. Huntington of New York. Huntington had been one of the "Big Four" involved in building the Central Pacific portion of the Transcontinental Railroad, which was just reaching completion.

Huntington supplied the Virginians with the money needed to complete the line to the Ohio River, through what was now the new state of West Virginia. The old Covington & Ohio's properties were conveyed to them in keeping with its new mission of linking the Tidewater coast of Virginia with the "Western Waters."

Collis Huntington intended to connect the C&O with his western and mid-western holdings, but had much other railroad construction to finance and he stopped the line at the Ohio and over the next few years did little to improve its rough construction or develop traffic. Because the great mineral resources of the region hadn't been fully realized yet, the C&O suffered through the bad times brought on by the Financial Panic of 1873, and went into receivership in 1878. Williams C. Wickham was named as its Receiver. When reorganized, it was renamed The Chesapeake & Ohio Railway Company.

In 1881, C&O's new Peninsula Extension was completed from Richmond through the new Church Hill Tunnel and down the Virginia Peninsula through Williamsburg to reach coal piers located on the harbor Hampton Roads, the East Coast of the United States' largest ice-free port.  Collis P. Huntington helped develop the tiny unincorporated community at Newport News Point into a new independent city with the coal and other railroad business and the development of Newport News Shipbuilding and Drydock Company.

In 1888 Huntington lost control of the C&O in a reorganization without foreclosure that saw his majority interest lost to the interests of J.P. Morgan and William K. Vanderbilt.  Morgan and Vanderbilt had Melville E. Ingalls installed as President. Ingalls was, at the time, also President of the Vanderbilt's Cleveland, Cincinnati, Chicago and St. Louis Railroad and held both presidencies concurrently for the next decade. In 1889 the Richmond and Allegheny Railroad company, which had been built along the tow-path of the defunct James River and Kanawha Canal, was merged into the C&O, giving it a down grade "water level" line from Clifton Forge to Richmond, avoiding the heavy grades of North Mountain and the Blue Ridge on the original Virginia Central route. This "James River Line" became the principal artery of eastbound coal transportation down to the present day.

From 1900 to 1920 most of the C&O's lines tapping the rich bituminous coal fields of southern West Virginia and eastern Kentucky were built, and the C&O as it was known throughout the rest of the 20th Century was essentially in place. In 1910 C&O merged the Chicago, Cincinnati & Louisville Railroad into its system. Also in 1910, C&O interests bought control of the Kanawha and Michigan (K&M) and Hocking Valley (HV) lines in Ohio, with a view to connecting with the Great Lakes through Columbus.

The Chesapeake and Ohio Railway never spent lavishly on streamlined passenger trains, or passenger service in general, opting to put most of its resources into moving coal and freight in general. Much of the reason for the popularity of C&O's passenger trains was because of Chessie, the sleeping kitten, one of the most successful and fondly remembered marketing campaigns ever developed.  Chessie sported two kittens, Nip and Tuck. During World War II, Chessie's "husband", Peake, was shown with a bandage on its paw as a war veteran returning from military service.

Despite the fact that in the early 1930s over 50% of American railroads went into receivership, the C&O not only avoided bankruptcy, but took the occasion of cheap labor and materials to again completely rebuild itself.  Because of this great upgrading and building program, C&O was in prime condition to carry the monumental loads needed during World War II. During the War it transported men and material in unimagined quantities as the U. S. used the Hampton Roads Port of Embarkation as a principal departure point for the European Theater.

During the Young era and following, C&O was headed by Walter J. Tuohy, under whose control the "For Progress" theme continued, though in a more muted way after the departure of Young. During this time, C&O installed the first large computer system in railroading, developed larger and better freight cars of all types, switched from steam to diesel motive power.

C&O continued to be one of the more profitable and financially sound railways in the United States, and in 1963, under the guidance of Cyrus S. Eaton, helped start the modern merger era by "affiliating" with the Baltimore & Ohio. Under the leadership of the visionary Hays T. Watkins Jr., the C&O, B&O and Western Maryland Railway became Chessie System, taking on the name officially that had been used for so long for the C&O, after the mascot kitten used in ads since 1933.