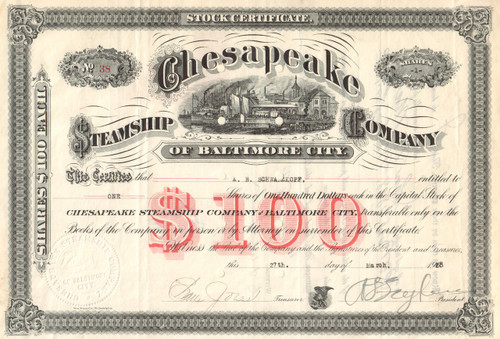 Very nice Chesapeake Bay steamer company piece with a great vignette of an early steamship loading passengers in Baltimore Harbor.  Larger certificate measuring 9" by 12.5".  Cancellation holes on the face of the certificate into the vignette. Issued and cancelled. Dated 1928.

The Chesapeake Steamship Company, began competing on the Baltimore-Norfolk route in 1874. Controlled by the Southern Railway, a rival of the RF&P.  The company eventually ran routes to Baltimore MD, Old Point Comfort (Hampton VA), Richmond VA, and Norfolk VA.

On June 14, 1941, the Baltimore Steam Packet Company's owner, the Seaboard Air Line Railroad, entered into an agreement with a consortium of railroads and steamship companies to merge the Chesapeake Steamship Company into the Old Bay Line. The railroad group, consisting of the Atlantic Coast Line Railroad, Southern Railway, and the SAL, together controlled the Baltimore Steam Packet Company and the Chesapeake Steamship Company. As a result, the Old Bay Line took over the Chesapeake Line's business and assets and became the sole operator of passenger and freight steamship transportation between the important ports of Baltimore and Norfolk.

As part of this agreement, half of the outstanding shares of the Baltimore Steam Packet Company was assigned to Chesapeake Steamship Company, which was one-third owned by Southern Railway and two-thirds owned by the Atlantic Coast Line Railroad. With the amalgamation, two of the Chesapeake Line's steamboats, the City of Norfolk and City of Richmond, were transferred to the Old Bay Line. As it turned out, these would be the last two vessels operated by the Old Bay Line when it went out of business in 1962. Robert E. Dunn was named president of the Old Bay Line in 1941, remaining at the helm of the company to the end of service in 1962.

The Baltimore Steam Packet Company, nicknamed the Old Bay Line, was an American steamship line from 1840 to 1962 that provided overnight steamboat service on the Chesapeake Bay, primarily between Baltimore, Maryland, and Norfolk, Virginia. Called a "packet" for the mail packets carried on government mail contracts, the term in the 19th century came to mean a steamer line operating on a regular, fixed daily schedule between two or more cities. When it closed in 1962 after 122 years of existence, it was the last surviving overnight steamship passenger service in the United States.

In addition to regularly calling on Baltimore and Norfolk, the Baltimore Steam Packet Company at various times provided freight, passenger and vehicle transport to Washington, D.C., Old Point Comfort, and Richmond, Virginia. The Old Bay Line, as it came to be known by the 1860s, was acclaimed for its genteel service and fine dining, serving Chesapeake Bay specialties. Walter Lord, famed author of A Night to Remember (and whose grandfather had been the packet line's president from 1893 to 1899), mused that its reputation for excellent service was attributable to "... some magical blending of the best in the North and the South, made possible by the Company's unique role in 'bridging' the two sections ... the North contributed its tradition of mechanical proficiency, making the ships so reliable; while the South contributed its gracious ease".