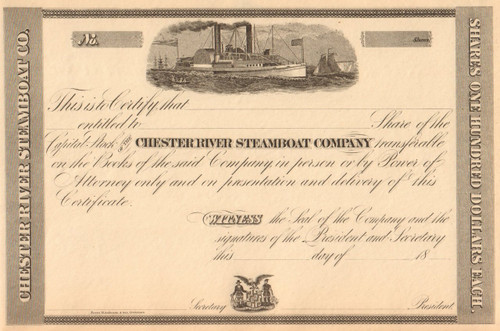 Great Chesapeake Bay collectible with a nice steamship vignette. Unissued and not cancelled. Circa 1865 from company records.

This company ran between Baltimore MD and the Chester River ending in Queen Anne's County. It was taken over by the Queen Anne Railway. The Maryland, Delaware, and Virginia (division of the Pennsylvania Railroad) took control around 1904.

The Chester River Steamboat Company was formed in 1865 when Col. B.S. Ford purchased the line of Henry B.Slaughter of Crumpton. Slaughter had been offering daily service along the Chester since 1860, with the boats Arrow, Chester and George Law. The new company prospered, and B.S. Ford, Corsica, Emma Ford and Gratitude were added to the fleet. They stopped at Chestertown, Rolphs Wharf, Quaker Neck, Cliffs, Spaniards Point, Spry’s Landing, Buckingham, Round Top, and Deep Landing. This regular steamboat service between the Chester and Baltimore provided local farmers and watermen with a reliable form of transport for their perishable produce, rockfish, crabs and oysters. It also allowed local merchants to bring in all manner of goods and merchandise for the thriving town of Chestertown.

The elevation of Mr. George Warfield, of Baltimore city, to the presidency caused no surprise. This gentleman had great experience In business far remote from transportation, but like a good mariner took bearings before venturing too far, and devoted his time and talents to acquiring the experience required for his new duties, and rapid progress he made in that direction. By a wonderful development of its interests, he proved the wisdom of his election to the management of the company's affairs. Under Mr. Warfield's administration the steemers Corisca and Emma A. Ford were built and the Gratitude purchased, which, with the B. S. Ford, comprised the fleet. Capt. P. O. McConnor, Mate W. S. Taylor and Capt. Jack Anthony with Capt. William M. Vandike for many years were in charge of the fleet. The Chester River Company with all its boats and fine wharf property were sold to the Pennsylvania Railroad Company, since which time it has been known as the Maryland, Delaware & Virginia Steamboat Company.