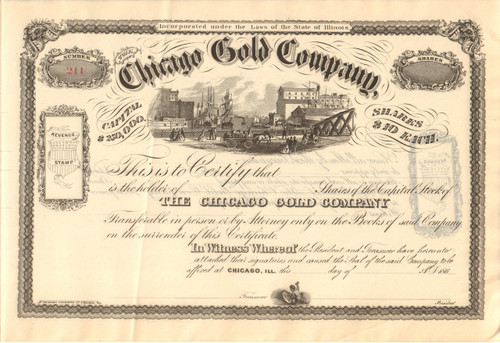 Awesome mining antique with a great vignette of a Chicago River Street bridge.  Unissued and not cancelled. Circa 1865 from company records. Dated 186_.

This company operated a gold mine and ranch in Colorado. In 1859, George M. Pullman (sleeper cars) decided to take advantage of the Pike's Peak Gold Rush and headed to Colorado. Rather than picking up a pick and shovel, however, he formed a partnership with James E. Lyon to operate a freight business and ore crushing mill. After dissolving the partnership with Lyon, Pullman formed a new partnership with Spafford C. Field, brother of former partner Benjamin Field.

The team of Pullman and Field eventually acquired about 1,600 acres of land near the gold fields, upon which they platted Cold Spring Ranch. The ranch became a prominent base camp for gold miners, providing them with beds, supplies, meals, and drinks. The company headquarters was located on Water Street near the Chicago River.