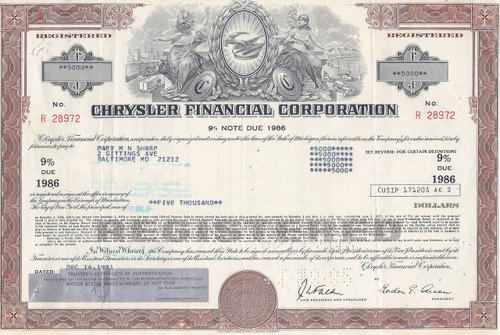 Affordable Chrysler-related pieces with the wonerful hood ornament vignette framed and flanked by Greek figues. These stock-sized bonds are from the 70's and 80's. Chrysler Financial (now TD Auto Finance) was prchased by Toronto-Dominion Bank.

Chrysler was founded by Walter P. Chrysler on June 6, 1925, when the Maxwell Motor Company was re-organized into the Chrysler Corporation.

Then in January 1924, Walter Chrysler launched the well-received Chrysler automobile. The Chrysler was a 6-cylinder automobile, designed to provide customers with an advanced, well-engineered car, but at a more affordable price than they might expect. The Maxwell was then dropped after its 1925 model year run.  In 1928, the Chrysler Corporation founded the Plymouth brand at the low priced end of the market  and it also introduced the DeSoto brand in the medium price field. Subsequently, Chrysler acquired the Dodge Brothers automobile company..

Plymouth was one of only a few marque that actually increased sales during the cash-strapped thirties. It was during this decade that the company created a formal parts division under the Mopar (Motor Parts) brand, with the result that Chrysler products are still often called Mopars.

In 1951, the firm introduced the first of a long and famous series of Hemi V8s.  Starting in the 1960, Chrysler thus became the only one of the Big Three American automakers to offer unibody construction on the vast majority of their product lines. The 1960 Valiant was the first production automobile with an Alternator rather than a electrical generator as standard equipment; it proved such a significant improvement that its use was expanded to all Chrysler products for 1961. The DeSoto marque was withdrawn from the market in 1961 models.

In April 1964, the Plymouth Barracuda, which was a Valiant sub-model, was introduced. The huge glass rear window and sloping roof were polarizing styling features. Barracuda was released almost two weeks before Ford's Mustang, and so the Barracuda was really the first pony car.  More successfully, at this same time the company helped create the muscle car market in the U.S., first by producing a street version of its Hemi racing engine and then by introducing a legendary string of affordable but high-performance vehicles such as the Plymouth GTX, Plymouth Road Runner, and Dodge Charger.

The 1970s brought both success and crisis. The aging but stalwart compacts saw a rush of sales as demand for smaller cars crested after the first gas crisis of 1973.   In desperation, the Chrysler Corporation on September 7, 1979 petitioned the United States government for $1.5 billion in loan guarantees to avoid bankruptcy. At the same time, Lee Iacocca, a former Ford executive, proved a capable public spokesman for the firm, regularly appearing in advertisements to advise customers that "If you find a better car, buy it."  With such help and a few innovative cars (such as the K-car platform), especially the invention of the minivan concept, a market where Chrysler brands are still important, Chrysler avoided bankruptcy and slowly fought its way back.

Chrysler acquired AMC in 1987, mostly for its Jeep brand. This bolstered the firm further, although Chrysler was still the weakest of the Big Three. The continuing popularity of Jeep, bold new models for the domestic market such as the Dodge Ram pickup, Dodge Viper (badged as "Chrysler Viper" in Europe) sports car, and Plymouth Prowler hot rod, and new "cab forward" front-wheel drive sedans put the company in a strong position as the decade waned.

In 1998 Daimler-Benz purchased Chrysler, forming DaimlerChrysler. This was initially declared to be a “merger of equals,” but it quickly became evident that Daimler-Benz was the dominant partner. Chrysler went into another of its financial tailspins soon after the merger, greatly depressing the stock price of the merged firm and causing serious alarm at headquarters in Germany, which sent a new CEO, Dieter Zetsche, to take charge in Auburn Hills. The Plymouth brand was phased out in 2001, and plans for cost-cutting by sharing of platforms and components began. The strongly-Mercedes-influenced Chrysler Crossfire was one of the first results of this program.

A return to rear-wheel drive was announced, and in 2004, a new Chrysler 300 using this technology and a new Hemi V8 appeared and became a solid hit. Financial performance began to improve somewhat, with Chrysler now providing a significant share of DaimlerChrysler profits due to restructuring efforts at the Mercedes Car Group.