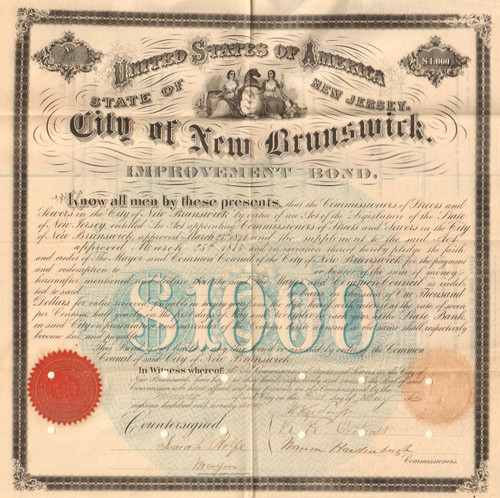 Incredible bond collectible. Amazing printing throughout with a vignette of the new Jersey state seal.  Nice under print of the $1000 denomination. Issued and cancelled. Large format at 14" by 15". Folds from storage that would be flat under glass (great framer). Dated 1877 in the text.

New Brunswick, officially City of New Brunswick, is a city in Middlesex County, New Jersey, United States. It is the county seat of Middlesex County,and the home of Rutgers University. The city is located on the Northeast Corridor rail line, 27 miles southwest of Manhattan, on the southern bank of the Raritan River. Due to the concentration of medical facilities in the area, including Robert Wood Johnson University Hospital and Saint Peter's University Hospital, as well as Rutgers, The State University of New Jersey's Robert Wood Johnson Medical School, New Brunswick is known as "the Hub City

Originally inhabited by the Lenape Native Americans, the first European settlement at the site of New Brunswick was made in 1681. The settlement here was first called Prigmore's Swamp (1681–1697), then known as Inian's Ferry (1691–1714). In 1714, the settlement was given the name New Brunswick, after the city of Braunschweig (called Brunswick in the Low German language), in state of Lower Saxony, in Germany. Braunschweig was an influential and powerful city in the Hanseatic League, later in the Holy Roman Empire, and was an administrative seat for the Duchy of Hanover. Shortly after the first settlement of New Brunswick in colonial New Jersey, George, Duke of Brunswick-Lüneburg, and Elector of Hanover, of the House of Hanover (AKA the House of Brunswick), became King George I of Great Britain (1660–1727). Alternatively, the city gets its name from King George II of Great Britain, the Duke of Brunswick-Lüneburg.

Centrally located between New York City and Philadelphia along an early thoroughfare known as the King's Highway and situated along the Raritan River, New Brunswick became an important hub for Colonial travelers and traders. New Brunswick was incorporated as a town in 1736 and chartered as a city in 1784. It was incorporated into a town in 1798 as part of the Township Act of 1798. It was occupied by the British in the winter of 1776–1777 during the Revolutionary War.