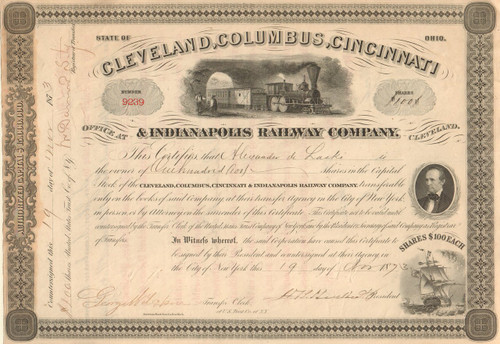 Stunning older railroad piece with great steam train vignette, a sailing ship at sea, and the company's president.  Light staining to the left which might be from gluing the certificates into the ledger upon redemption.  Issued and (cut) cancelled. Dated 1873

The CCC&I, after its formation in 1868, sought to make a connection to Cincinnati. This connection was never realized by its predecessor line the Cleveland Columbus and Cincinnati Railroad which only ran trains between Cleveland and Columbus. By 1872, the CCC&I made agreements to operate the Cincinnati and Springfield Railroad between Cincinnati and Dayton and the Cincinnati, Sandusky and Cleveland Railroad between Dayton and Springfield, finally providing a through route from Cleveland to Columbus to Cincinnati. In 1889, the CCC&I merged with lines in Indiana and Illinois to form the Cleveland, Cincinnati, Chicago and St. Louis Railroad, known as the Big Four Route. It eventually became a part of the New York Central Railroad.

The Cleveland, Columbus and Cincinnati Railroad was chartered in 1836. In the 1840s, construction from Cleveland through Galion and Delaware to Columbus was begun. The road entered Columbus from the north, running east and parallel to Fourth Street, then swinging southwestward to enter the passenger depot of the Columbus and Xenia Railroad. On February 21, 1851 a grand excursion train with 425 passengers took members of the state and city government to Cleveland, returning them to Columbus after a day's layover. Regular traffic was begun in April 1851, a full year after service began on the C&X.