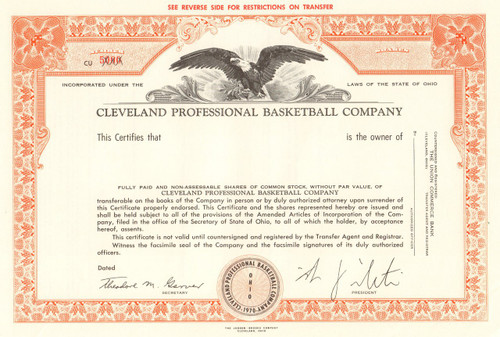 Great sports collectible.  Nice vignette of an eagle with wings spread perched, holding an olive branch. Unissued and cancelled. Circa 1970 from company records.

The Cleveland Cavaliers, also known as the Cavs, are an American professional basketball team based in Cleveland, Ohio. The Cavaliers compete in the National Basketball Association (NBA), as a member of the league's Eastern Conference Central Division. The Cavaliers are the only remaining charter member of the division.

The team began play in the league in 1970 as an expansion team.  The Cavaliers first began play in the NBA in 1970 as an expansion team under the ownership of Nick Mileti. Jerry Tomko, the father of future Major League Baseball pitcher Brett Tomko, submitted the winning entry to name the team the "Cavaliers" through a competition sponsored by The Plain Dealer; supporters preferred it to "Jays", "Foresters" and "Presidents". Playing their home games at Cleveland Arena under the direction of head coach Bill Fitch, they compiled a league-worst 15–67 record in their inaugural season.

Home games are played at Quicken Loans Arena, which the team shares with the Cleveland Gladiators of the Arena Football League, and the Lake Erie Monsters of the American Hockey League. The Cavaliers have featured many NBA stars during their history, including All-Stars Austin Carr, Brad Daugherty, Zydrunas Ilgauskas, Mark Price, LeBron James, Kyrie Irving, Mo Williams and Kevin Love. Past NBA greats such as Nate Thurmond, Lenny Wilkens, Walt "Clyde" Frazier, and Shaquille O'Neal have also played in Cleveland. The franchise has won four Central Division championships (1976, 2009, 2010, and 2015) and two Eastern Conference championships (2007, and 2015). The Cavaliers have reached the playoffs 19 times in their 45-year history.