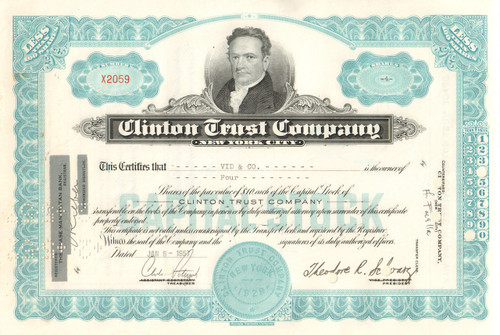 Very nice stock with a vignette of Dewitt Clinton (Senator and Governor of New York).  Issued and cancelled. Dated 1950's.

The Clinton Trust Company was founded as a bank in 1929. The bank operated a large stone bank on Clinton Avenue in Newark, NJ.  It merged with Chase Manhattan Bank in 1959.

Tough piece to research ~ try Googling "Clinton Trust" and you get thousands of stories on Hillary and Bill Clinton. We would email you more but that's classified and on a private server where our emails mysteriously disappear. We will check with our intern Monica Lewinsky on that topic......

DeWitt Clinton (March 2, 1769 – February 11, 1828) was an early American politician and naturalist who served as a United States Senator and was the sixth Governor of New York. In this last capacity, he was largely responsible for the construction of the Erie Canal. Clinton was the leader of New York's People’s Party and was a major rival of Martin Van Buren, who was the Attorney General of New York during Clinton's governorship. Clinton believed that infrastructure improvements could transform American life, drive economic growth, and encourage political participation; and he heavily influenced the development of the New York State and the United States.

DeWitt Clinton was the second son born to James Clinton and his wife Mary DeWitt (1737–1795, aunt of Simeon De Witt) and was educated at King's College, which is now Columbia University after transferring from Princeton University, becoming the first to graduate under the new name. He was the brother of George Clinton, Jr., who served in Congress, and the half-brother of James G. Clinton, who also served in Congress. He became the secretary to his uncle George Clinton, who was then governor of New York. Soon after, he became a member of the Democratic-Republican Party. He was a member of the New York State Assembly in 1798, and of the New York State Senate from the Southern District in 1798-1802 and 1806-1811. He was a delegate to the New York State Constitutional Convention in 1801. He was a member of the Council of Appointments in 1801–1802 and 1806–1807.

He was married twice. On February 13, 1796, he married Maria Franklin, daughter of the prominent New York Quaker merchant, Walter Franklin and descendant of John Bowne and Elizabeth Fones. By her, he had ten children, four sons and three daughters surviving at the time of her death in 1818. On May 8, 1819, he married Catharine Jones, daughter of a New York physician, Thomas Jones; she outlived her husband. His son, George William Clinton (1807–1885), served as Mayor of Buffalo, New York, 1842–1843.

From 1810 to 1824, he was a member of the Erie Canal Commission. He was among the first members, appointed in 1810, who projected and surveyed the route to be taken. After 1816, he became the driving force during the construction of the canal.

In 1811, the death of John Broome left a vacancy in the office of Lieutenant Governor of New York. In a special election, Clinton defeated the Federalist Nicholas Fish and the Tammany Hall candidate Marinus Willett, to become Lieutenant Governor until the end of the term in June 1813.

In 1812, Clinton ran for President of the United States as candidate for both the Federalist Party and a small group of anti-war Democratic-Republicans. In the close election of 1812, Clinton was defeated by President Madison; Clinton received 89 electoral votes to James Madison's 128. It was the strongest showing of any Federalist candidate for the Presidency since 1800, and the change of the votes of one or two states would have given Clinton the victory.

After the resignation of Governor Tompkins, who had been elected Vice President, he won a special gubernatorial election in which he was the only candidate. 1,479 votes were cast for Peter Buell Porter – against Clinton's 43,310 – because the Tammany organization, which fiercely hated Clinton, had printed ballots with Porter's name on them and distributed them among the Tammany followers in New York City. On July 1, 1817, Clinton took office as Governor of New York. He was re-elected in 1820, defeating the sitting Vice President Tompkins in a narrow race – DeWitt Clinton 47,447 votes, Tompkins 45,900 – and served until December 31, 1822.

During his second term, the New York State Constitutional Convention of 1821 shortened the gubernatorial term to two years, and moved the beginning of the term from July 1 to January 1, actually cutting off the last 6 months of the 3-year-term he had been elected to. Also the gubernatorial election was moved from April to November, but Clinton was not renominated by his party to run for re-election in November 1822. Even so, he still kept his post as President of the Erie Canal Commission. In April 1824, a majority of his political enemies, the Bucktails, voted in the New York State Legislature for his removal from the Canal Commission. This caused such a wave of indignation among the electorate, that he was nominated for Governor by the "People's Party", and was re-elected governor, against the official candidate of the Democratic-Republican Party, fellow canal commissioner Samuel Young. He served another two terms until his sudden death in office.

Clinton was a Freemason, and in 1806, he was elected Grand Master of the Grand Lodge of New York. He retained this title until 1819. The Grand Lodge of New York has established the DeWitt Clinton Award. The Award recognizes distinguished or outstanding community service by non-Masonic organizations or individuals whose actions exemplify a shared concern for the well-being of Mankind and a belief in the worldwide brotherhood of Man. Clinton was also essential in establishing the Grand Encampment of Knights Templar in the United States, serving as its first, second, and third Grand Master from 1816-1829.When DeWitt Clinton died suddenly in Albany on February 11, 1828, he left his family in poor financial condition.