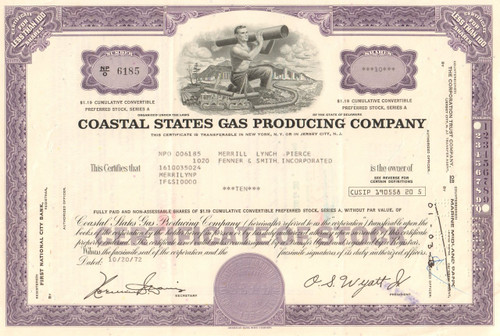 Great piece with a vignette of a man with pipe on his shoulder in a pipeline contraction area.  City and refinery scenes in the background.  Issued and cancelled. Dated in the 1960's - 1970's.

Coastal Corporation was a diversified energy and petroleum products company headquartered at 9 Greenway Plaza (Coastal Tower) in Greenway Plaza, Houston, Texas. The company was founded in 1955 by Oscar Wyatt and incorporated in 1955 as Coastal States Gas Producing Company. It was a major energy producer when it merged with the El Paso corporation in 2001.

Coastal was a key natural gas producer and distributor along with competitors Enron, Williams, and El Paso Energy, which Coastal later merged with. Coastal produced, gathered, processed, transported, stored and marketed natural gas throughout the United States and by the 1990s Coastal's 20,000-mile pipeline network, including the Iroquois and Great Lakes pipeline, completed in 1991, and the Empire State Pipeline, completed in 1992, transported five billion cubic feet of natural gas daily.

Founder Oscar Wyatt was born into poverty in Beaumont, Texas. Oscar served in World War II, and was decorated and wounded twice as a bomber pilot. Earning a degree in mechanical engineering from Texas A & M University, gained experience in the oil business selling drill bits from the trunk of his Ford Coupe. The ambitious, Wyatt founded Coastal States Gas Producing Company in 1955. Like Oscar, Coastal began business in modest circumstances, with 68 miles of pipeline and 78 employees. A 2007 Texas Monthly magazine article called Wyatt the real "JR Ewing" of the oil business and described Oscar and his wife Lynn Sakowitz, a fixture of Houston social, fashion together as the beauty and the beast."

While El Paso Energy was selling Coastal's petroleum marketing and production assets off piece by piece to competitors Valero, Sunoco, and Conoco Phillips; Oscar Wyatt was being investigated for illegally doing business with Iraq's Saddam Hussein in violation of United Sanctions that strictly regulated Iraqi sales of crude oil. In 2007, Oscar Wyatt pled guilty in a U.S. federal court for illegally sending payments to Iraq under the Oil for Food program. At his sentencing hearing, Wyatt's attorney Shargel who also defended Mafia boss Jon Gotti pointed to a commission report, led by former Federal Reserve Board chairman Paul Volcker that concluded that about half of the 4,500 companies in the Oil-for-Food Program paid a total of $1.8 billion in kickbacks and illicit surcharges to Saddam’s regime.

In 1980 Wyatt changed the company's name to Coastal Corporation, and in the same year revenues exceeded $5 billion. In 1980 in Houston, Wyatt and two other oil executives pleaded guilty to criminal violations of federal crude oil pricing regulations. Wyatt and the president of Coral Petroleum were each fined $40,000. Each company was required to refund $9 million to the U.S. Department of the Treasury, and each incurred $1 million in civil penalties. Economic recession and an oversupply of oil and natural gas, as well as conservation by consumers, led to Coastal's first loss, which amounted to $96.4 million for the year 1981. Wyatt trimmed the workforce and cut the budget, and within six months he had restored the company to profitability.

In the mid-1980s the U.S. government sought to foster competition in the natural gas industry through deregulation. The new government policy, together with falling prices, created difficulties for many energy companies. Coastal not only survived deregulation but also took full advantage of the competitive atmosphere by launching hostile takeover bids for other struggling energy companies. The mere threat of a takeover by Coastal could send the stock price of a target company soaring. In 1983, for example, Coastal's attempt to secure Texas Gas Resources failed, yet Coastal's initial investment in the company generated a total of $26.4 million in profits. Intervening companies that came to the rescue of Texas Gas Resources were forced to buy up shares held by Coastal at inflated prices. Wyatt's unsuccessful attempt to take over Houston Natural Gas in 1984 yielded a similar return of $42 million. In 1985 Wyatt set about acquiring American Natural Resources (ANR), one of the most profitable natural gas pipelines in the Midwest. Despite ANR's initial determination to stay free of Coastal's clutches, Wyatt pushed through an all-cash deal of $2.45 billion, which ANR shareholders could not refuse. The acquisition transformed Coastal into a major power in the U.S. gas business.