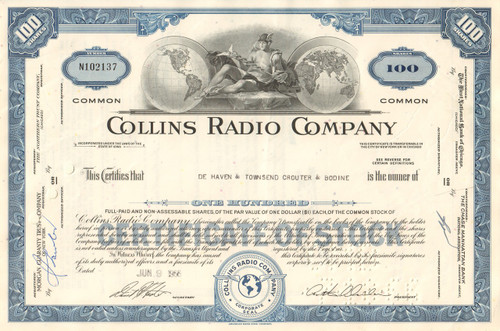 Arthur Collins founded Collins Radio Company in 1933 in Cedar Rapids, Iowa, for the purpose of designing and producing both shortwave radio equipment and equipment for the burgeoning AM Broadcast industry. As the Collins reputation for fine quality and uncompromising construction grew, Collins was solicited by the military, the scientific community and by the larger AM radio stations for special equipment. The company captured worldwide attention when Collins supplied the equipment to establish a communications link with the South Pole expedition of Rear Admiral Richard Byrd in 1933.

It is important to note that during these initial decades of the Collins production of radio equipment, reliability and dependability characterized the demand for equipment. As an example, during the pre-WW2 years, the National Radio Company was the principal contractor for the US military. This changed with the US entrance into WW2 and Collins quickly became the principal supplier of radio and navigation equipment used in the military theater, where uncompromising performance was required.