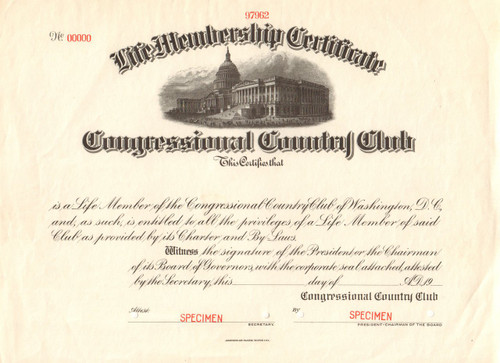 Amazing specimen life membership certificate from the Congressional Country Club. The piece has a great vignette of the DC Capitol (Congress) Building.  Measure 9.5" by 12.5". Some light wrinkling on the edge from storage. Specimen circa 1924.

Congressional Country Club is a country club and golf course in Bethesda, Maryland, USA. Congressional opened in 1924 and its Blue Course has hosted three U.S. Opens and a PGA Championship.

Congressional's expansive clubhouse is the largest clubhouse in the United States. It was designed in 1924 by architect Philip M. Jullien (1875-1963). Congressional Country Club has an indoor bowling alley, tennis club, grand ballroom, one indoor and two outdoor pools, fitness center, fine dining and grand foyer. It also has overnight guest accommodations and a paddle tennis area. It has hosted a number of famous weddings. It also has a spa, massage services, indoor jacuzzi, men's and women's locker rooms, two bars with large plasma televisions, and a grill for everyday eating.

Founding life members include William H. Taft, Woodrow Wilson, Warren G. Harding, Calvin Coolidge and Herbert Hoover. It is currently an annual stop on the PGA Tour, with the AT&T National hosted by Tiger Woods. The Tournament is now known as the Quicken Loans National. Previously, Congressional hosted the Kemper Open until its move to nearby TPC at Avenel in 1987. While Avenel was under renovation in 2005, the tournament returned to Congressional, then known as the Booz Allen Classic. Congressional hosted its third U.S. Open in 2011. Tournament winners at Congressional have included Rory McIlroy, Ken Venturi, Ernie Els, Justin Rose and Tiger Woods, among many others.

Congressional has two 18-hole golf courses: the world-renowned Blue Course and the Gold Course. The Blue Course was designed by Devereux Emmet and has been renovated over the years by numerous architects, including Donald Ross, Robert Trent Jones and most recently by Rees Jones. The course was included in the Links series, and in 2011 is to be available for the Virtual Championship at World Golf Tour. Both courses are known for their rolling terrain, tree-lined fairways, and wide challenging greens. Water hazards also come into play on both courses.

The first major championship at Congressional was the U.S. Open in 1964, won by Ken Venturi in oppressive heat with a score of two under par in the last Open to finish with two rounds on Saturday. A dozen years later, the PGA Championship was held at Congressional in 1976. With the course playing as a par 70, 1970 champion Dave Stockton sank a par-saving putt on the 72nd hole to win his second PGA Championship by one stroke at 281 (+1). The second U.S. Open at Congressional was played in 1997. Ernie Els, the 1994 champion, won his second U.S. Open with a score of four under par. The Blue Course hosted the U.S. Open in 2011, and 22-year-old Rory McIlroy of Northern Ireland won his first major with a final score of 16 under par, a U.S. Open record, with a victory margin of 8 shots. Congressional has hosted one senior major golf championship; the 1995 U.S. Senior Open, won by Tom Weiskopf.

The Kemper Open, later called the Booz Allen Classic, was played at Congressional eight times. Notable winners include Craig Stadler, John Mahaffey, Fred Couples, Greg Norman, and Sergio García. The 2007 AT&T National, sponsored and hosted by Tiger Woods, was played at Congressional July 5–8 and was won by K.J. Choi of South Korea. The 2008 AT&T was played July 3–6 and won by Anthony Kim. Tiger Woods was unable to play due to surgery on his knee. The 2009 AT&T National was played July 2–5 and won by host, Tiger Woods. The 2012 playing of the AT&T National saw a much harder golf course than the U.S. Open, with only ten players finishing under par. The tournament was won once again by Tiger Woods at 8 under par.

The course has hosted two USGA amateur golf tournaments: the U.S. Junior Amateur of 1949, won by Gay Brewer, and the U.S. Women's Amateur of 1959, won by Barbara McIntire. The 2009 U.S. Amateur had originally been scheduled to be played at Congressional, but the event was relocated in order to allow the club to make further changes to the course prior to the 2011 US Open. This scheduling change allowed for the AT&T National to be held in 2009 at Congressional.

Members of Congressional have included: