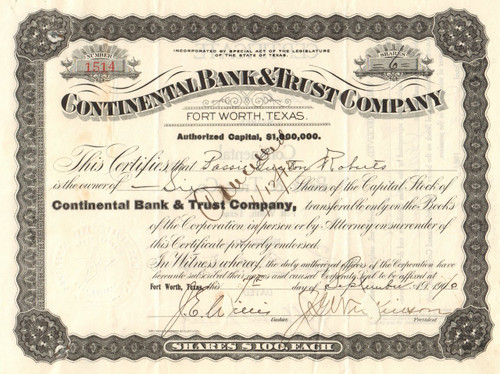 Founded in Prosper, Texas in 1903, it was originally called the Continental Bank & Trust Company. The bank was established by H. H. Wilkinson of Fort Worth to serve the booming agriculture industry of the area. In 1905, Texas adopted state banking laws, and the name of the bank was changed to Continental State Bank.

For the next fifteen years, Mr. Wilkinson managed the bank and employed Mr. U.N. Clary of Prosper as cashier of the bank. In 1920, Mr. Clary purchased the bank and changed the name to Prosper State Bank. Under the leadership of Mr. Clary and his team of bankers, Prosper State Bank provided banking services to the residents and businesses in the area. During these years, the banking industry experienced prosperous times as well as the stock market crash in 1929, a period of history reflecting the demise of many banks.

The year 1965 marked another milestone in the history of the bank when Mr. Charles J. Winikates of Dallas, Texas purchased the bank from Mr. Clary. Subsequently, in 1989 Mr. Winikates opened a branch of Prosper State Bank in Frisco, Texas to service the tremendous growth in the Frisco community. The Winikates family owned and operated the bank until February 2006, when the bank was sold to Prosper Bancshares, Inc. and became Prosper Bank. Prosper Bancshares, Inc is a Texas bank holding company that is supported by a group of investors who are committed to community banking.