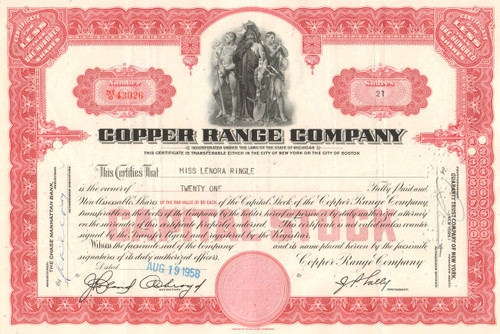 Great mining piece with an unusual vignette of three classical male figures with mining tools.  Issued and cancelled. Dated in the 1950's.

The Copper Range properties mined copper in the form of native copper in stratiform orebodies in the flow tops of Precambrian basalt lava flows. The ore horizons are known locally as amygdaloids, after the amygdaloidal-shaped gas bubbles in the lavas that filled with minerals. Copper Range shut down the Champion mine, its last operating native copper property, in 1967.

Copper Range spun off its wholly owned subsidiary White Pine Copper Co., which in 1955 opened the White Pine mine at the south end of the copper belt, at White Pine, Michigan, Ontonagon County. The White Pine mine contained a large strataform body of chalcocite-impregnated siltstones and shales of the Precambrian Nonesuch Shale Formation. The ore also contained native copper, usually as individual grains but often as sheets several feet long. The White Pine mine produced copper until 1995.

In its early days it was known for its use of advanced mining and transport systems including the Dashaveyor, a high speed transportation system, and what was at the time the world's largest hard rock tunnelling machine to be sold to a mining company. It was also one of the earlier mines to use rubber tyred mining equipment on a large scale. An interesting sidelight was that about 70% of the workforce was of Finnish descent, which in some ways was not surprising given the similarity between the countryside around the mine and rural Finland.

Louisiana Land and Exploration bought Copper Range in 1977, then sold the operation to Echo Bay Mines Limited in 1983. Echo Bay sold the operation to the employees in 1985 but kept part of the milling circuit. In this transaction 70% of the shares went into an ESOP (Employees Stock Option Plan) and the remaining 30% were held by Mine Management Resources. It was at this time that an attempt was made to obtain a stock exchange listing, but it failed due to a variety of factors, including the move of mining into areas in which royalties had to be paid e.g. to AMAX in the south west area, the general decrepitude of the mining machinery and not least the start of a general crushing of the pillars and collapse in the central worked out areas which was at least partially stopped by wrapping pillars with conveyor belt and old haulage rope to stabilize them. The employees subsequently sold Copper Range to Metall Mining Corporation (shortly to rename itself Inmet Mining) in 1989. After a fruitless attempt to put the mine back into profit again, Inmet closed it in 1995. Proposals to carry on mining by sulphuric acid leaching were considered but these were shelved in 1997, the mine was allowed to flood and reclamation work started. The refinery continues to operate, however, and is now owned by HudBay Minerals.