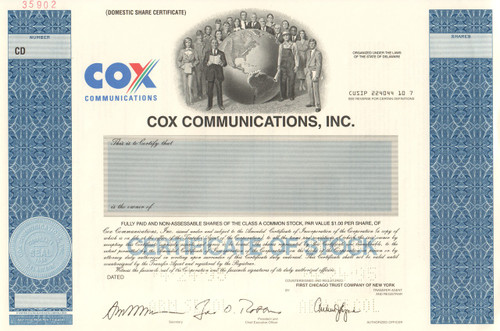 Cox Communications is a privately owned subsidiary of Cox Enterprises providing digital cable television, telecommunications and Home Automation services in the United States. It is the third-largest cable television provider in the United States and seventh-largest telephone carrier in the country. Cox is headquartered in Sandy Springs, Georgia, U.S., in the Atlanta metropolitan area.

Cox Enterprises expanded into the cable television industry in 1962 by purchasing a number of cable systems in Lewistown, Lock Haven and Tyrone (all in Pennsylvania), followed by systems in California, Oregon and Washington. The subsidiary company, Cox Broadcasting Corporation (later renamed to Cox Communications), was not officially formed until 1964, when it was established as a public company traded on the New York Stock Exchange. It was taken private by Cox Enterprises in 1985.

In 1999, Cox acquired the cable television assets of Media General in Fairfax County and Fredericksburg, Virginia. In 2000, Cox Communications acquired Multimedia Cablevision with assets in Kansas, Oklahoma and North Carolina. On November 1, 2005, Cox announced the sale of all of its Texas, Missouri, Mississippi and North Carolina properties, as well as some systems in Arkansas, California, Louisiana and Oklahoma to Cebridge Communications. The sale closed in 2006 and those systems were transitioned by their new owner from Cox branding to Suddenlink Communications.