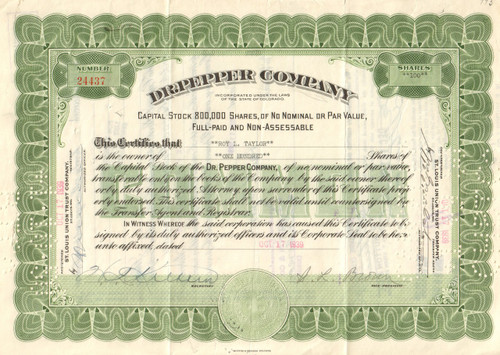 Dr Pepper is a carbonated soft drink marketed as having a unique flavor. The drink was created in the 1880s by Charles Alderton in Waco, Texas and first served around 1885. Dr Pepper was first nationally marketed in the United States in 1904,

The U.S. Patent Office recognizes December 1, 1885, as the first time Dr Pepper was served. It was introduced nationally in the United States at the 1904 Louisiana Purchase Exposition as a new kind of soda pop, made with 23 flavors. Its introduction in 1885 preceded the introduction of Coca-Cola by one year. It was formulated by Brooklyn-born pharmacist Charles Alderton in Morrison's Old Corner Drug Store in Waco, Texas. To test his new drink, he first offered it to store owner Wade Morrison, who also found it to his liking. Patrons at Morrison's soda fountain soon learned of Alderton's new drink and began ordering a "Waco" Alderton gave the formula to Morrison, who named it Dr Pepper.

Theories abound about the origins of the soft drink's name. One conjecture is the "pep" refers to pepsin. In 2009, an old ledger book filled with formulas and recipes was discovered by Bill Waters while shopping at an antiques stores in the Texas Panhandle. Several sheets and letterheads hinted it had come from the W.B. Morrison & Co. Old Corner Drug Store and faded letters on the book's cover spelled out "Castles Formulas". John Castles was a partner of Morrison's for a time and worked at that location as early as 1880. One recipe in the book titled "D Peppers Pepsin Bitters" was of particular interest, and some speculated it could be an early recipe for Dr Pepper. However, Dr Pepper Snapple Group insists it is not the formula for Dr Pepper, but is instead a medicinal recipe for a digestive aid. The book was put up for auction in May 2009, but no one purchased it. Like many early sodas, the drink was marketed as a brain tonic and energizing pick-me-up, so another theory holds that it was named for the pep it supposedly gave to users.

Others believe the drink was named after a real Dr. Pepper. One candidate is Dr. Charles T. Pepper of Rural Retreat, Virginia, who may have been so honored by Morrison either for having granted him permission to marry Dr. Pepper's daughter, or in gratitude to Pepper for having given Morrison his first job. However, Morrison lived nearly 50 miles from Rural Retreat, and Pepper's daughter was only eight years old at the time Morrison moved to Waco. Another possibility is Dr. Pepper of Christiansburg, Virginia. U.S. Census records show a young Morrison working as a pharmacy clerk in Christiansburg. One of the following pages of this census supposedly shows a Dr Pepper and daughter Malinda or Malissa, age 16. Since census takers of the period were walking door to door, and their census entries were on following pages, it seems likely that Morrison and the family of Dr. Pepper did not live very far from each other.

Dr Pepper became insolvent in the early 1980s, prompting an investment group to take the company private. Several years later, Coca-Cola attempted to acquire Dr Pepper, but was blocked from doing so by the Federal Trade Commission. Around the same time, Seven Up was acquired from Phillip Morris by the same investment company that bailed out Dr Pepper. Upon the failure of the Coca-Cola merger, Dr Pepper and Seven Up merged (creating Dr Pepper/Seven Up, Inc., or DPSU), giving up international branding rights in the process. After the DPSU merger, Coca-Cola obtained most non-US rights to the Dr Pepper name with PepsiCo taking the Seven Up rights.

Presently, Dr Pepper Snapple relies on its own bottling group to bottle and distribute its products in more than 30 states. Coca-Cola and Pepsi have essentially stopped bottling and distributing CSAB products in favor of in-house alternatives, although regional exceptions can be found.