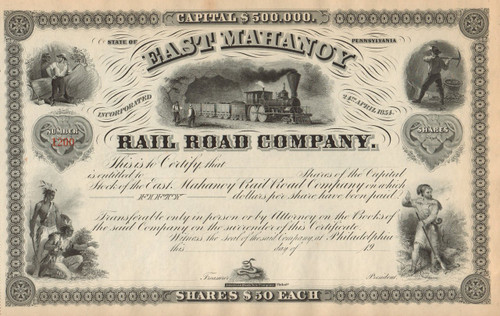 Stunning old cert with multiple vignettes.  The top scene has an older steam train and cars exiting from a tunnel.  The top left and right vignettes have miners while the bottom vignettes have American Indians and an early settler. Unissued and not cancelled. Date 19xx but circa 1906 from issued examples.

The company operated a coal transport line in the Schuykill coal mines through the Mahanoy Valley in Pennsylvania.  The rail line was used by the Reading and other early railroads. The East Mahanoy Railroad started operations in 1854 and stopped service in 1951 for a total period of operations of 97 years.  Great small line that lasted much longer than most due to its limited but steady route.