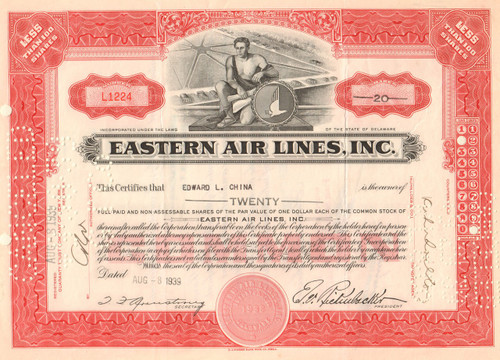 Eastern was one of the "Big Four" domestic airlines created by the Spoils Conferences of 1930, and was headed by World War I flying ace Eddie Rickenbacker in its early years. It had a near monopoly in air travel between New York and Florida from the 1930s until the 1950s and dominated this market for decades afterward. Labor disputes and high debt loads strained the company in the late 1970s and early 1980s under the leadership of former astronaut Frank Borman. Frank Lorenzo acquired Eastern in 1985 and moved many of its assets to his other airlines, including Continental Airlines and Texas Air. After continued labor disputes and a crippling strike in 1989, Eastern ran out of money and was liquidated in 1991.

Eastern pioneered hourly air shuttle service between New York City, Washington, DC and Boston in 1961 as the Eastern Air Lines Shuttle. It took over the South American route network of Braniff International in 1982 and also served London and Madrid in the 1980s.

Eastern Air Lines was a composite of assorted air travel corporations, including Florida Airways and Pitcairn Aviation. In the late 1920s, Pitcairn Aviation won a contract to fly mail between New York City and Atlanta, Georgia on Mailwing single-engine aircraft. In 1929, Clement Keys, the owner of North American Aviation, purchased Pitcairn. In 1930, Keys changed the company's name to Eastern Air Transport. After being purchased by General Motors and experiencing a change in leadership after the Airmail Act of 1934, the airline became known as Eastern Air Lines.

In 1938 World War I flying ace Eddie Rickenbacker bought Eastern from General Motors. The complex deal was concluded when Rickenbacker presented Alfred P. Sloan with a certified check for $3.5 million.

Rickenbacker pushed Eastern into a period of growth and innovation; for a time Eastern was the most profitable airline in the post-war era, never needing state subsidy. In the late 1950s Eastern's position was eroded by subsidies to rival airlines and the arrival of the jet age. In 1956 Eastern bought Colonial Airlines, giving the airline its first routes to Canada. Rickenbacker's position as CEO was taken over by Malcolm A. MacIntyre, a brilliant lawyer but a man inexperienced in airline operations, on October 1, 1959. Rickenbacker's ouster was largely due to his reluctance to acquire expensive jets; like many others, he underestimated their appeal to the public. A new management team headed by Floyd D. Hall took over on 16 December 1963, and Rickenbacker left his position as Director and Chairman of the Board on December 31, 1963, aged 73.

In November 1959, Eastern Air Lines opened its Terminal 1 at New York City's Idlewild. In 1960, Eastern's first jets, Douglas DC-8-21s, started to take over the longer flights, like the non-stops from Chicago and New York to Miami. The DC-8s were joined in 1962 by the Boeing 720 and in 1964 by the Boeing 727-100, which Eastern had helped Boeing develop. Shortly after, "Captain Eddie" Rickenbacker retired .

Eastern bought the Lockheed L-1011 TriStar and Airbus A300 widebody jets; the former would become known in the Caribbean as El Grandote (the huge one). Although Eastern had purchased four 747s, the delivery slots were sold to Trans World Airlines (TWA) when Eastern decided to purchase the L-1011.

Due to massive delays in the L-1011 program, mainly due to problems with the Rolls-Royce RB211 engines, Eastern leased two Boeing 747-100s from Pan Am between 1970 and 1972 and operated the aircraft between Chicago and San Juan as well as from New York to Miami and San Juan.

Just before Walt Disney World opened in 1971, Eastern became its "official airline". It remained the official airline of Walt Disney World and sponsored a ride at the Magic Kingdom park (If You Had Wings in Tomorrowland where Buzz Lightyear's Space Ranger Spin is currently located) until its contracting route network forced Disney to switch to Delta shortly before Eastern's 1989 bankruptcy filing.

The famous "Wings of Man" campaign in the late 1960s was created by advertising agency Young & Rubicam, and restored Eastern's tarnished image until the late 1970s, when former astronaut Frank Borman became president and it was replaced by a new campaign, "We Have To Earn Our Wings Every Day". The new campaign, which featured Borman as a spokesperson, was used until the mid-to-late 1980s.

In 1975, Eastern was headquartered at 10 Rockefeller Plaza in New York City. After Frank Borman became president of Eastern Air Lines in 1975, he moved Eastern's headquarters from Rockefeller Center to Miami-Dade County, Florida. Eastern's massive Atlanta hub was in direct competition with Delta Air Lines, where the two carriers competed heavily to neither's benefit. Delta's less-unionized work force and slowly expanding international route network helped lead it through the turbulent period following deregulation in 1978. In 1980, a Caribbean hub was started in San Juan, Puerto Rico. In 1982, Eastern acquired Braniff's South American route network. By 1985, Eastern was the largest IATA airline in terms of passengers and operated in 26 countries on three continents.

Borman agreed to the sale of the airline in 1986 to Texas Air, led by Frank Lorenzo. Lorenzo was known as a ruthless corporate raider and union buster. He had already purchased Continental Airlines and lost a bidding war for TWA to Carl Icahn.  In 1988, Phil Bakes, the president of Eastern Air Lines, announced plans to lay off 4,000 employees and eliminate and reduce service to airports in the Western United States; he said that the airline was going "back to our roots" in the East.

During Lorenzo's tenure, Eastern was crippled by severe labor unrest. Asked to accept deep cuts in pay and benefits, on March 4, 1989, Frank Lorenzo locked out Eastern's mechanics and ramp service employees. Concerned that if Lorenzo was successful in breaking the IAM he would do the same to the pilots' and flight attendants' unions, the pilots represented and flight attendants called a sympathy strike. Due to the lockout and sympathy strike, cancelled flights resulted in the loss of millions of dollars in revenue.[citation needed]

In 1989, Lorenzo sold Eastern Air Lines Shuttle to real estate magnate Donald Trump (who named it the Trump Shuttle) while selling other parts of Eastern to his Texas Air holding company and its subsidiary, Continental Airlines, at terms disadvantageous to Eastern.  In 1989 George Berry, the Georgia Industry and Trade Commissioner, asked Eastern to consider moving its headquarters from the Miami area to the Atlanta area.  As a result of the strike, weakened airline structure, high fuel prices, inability to compete after deregulation and other financial problems, Eastern filed for bankruptcy protection on March 9, 1989. The airline stopped flying at midnight Saturday, January 19, 1991. On the previous evening company agents, unaware of the decision, continued to take reservations and told callers that the airline was not closing.