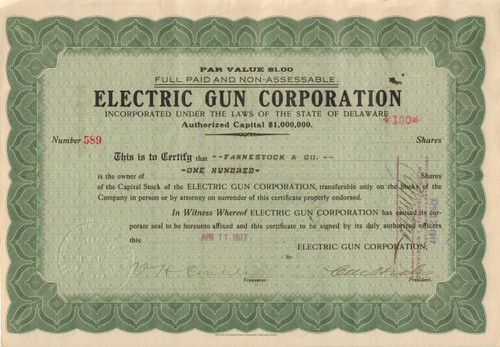 Rare piece of military and technological financial history. Plain certificate but very interesting company history. The certificate measures 11.5" wide and 8.25 inches tall, including borders. Dated 1917 (various dates) - issue and cancelled by stamp/signature. Signed by Charles M Hicks as president and V. H. Conkle as treasurer. Incorporated in Delaware on October 30,1915 but the company was headquartered at 519 Pennsylvania Building, Fifteenth and Chestnut Streets, in Philadelphia PA.

The Electric Gun Corporation was organized to manufacture and sell electric guns under patent rights for several electromagnetic-mechanisms by the inventor, Frederick B. MacLaren.

World War I stimulated a strong interest in the improvement of guns in general and, in particular, the first serious investigations of an electrically driven gun. The Electric Gun Corporation intended to begin with the manufacture of a 3-inch field piece to expel a 20-pound projectile at a velocity of 2500 feet per second.  The gun was to be smokeless, flash-less, noiseless, and derive power from the nearest electric wire. Several examples were built and demonstrated but interest waned for weapons after the completion of World War I.

MacLaren’s U.S. patent of 1916 described a traveling magnetic wave induction launcher powered by a high-frequency,three-phase generator. In this, the traveling magnetic wave induced currents in the projectile and provided the EM force that accelerated the projectile through the barrel.  MacLaren's concepts were reviewed over the years and considered the modern invention of the rail gun (although the concept of electromagnetic artillery went back to the 1880's). In 1937, Princeton engineering professor Edward Northrup reviewed MacLaren's and other's work on the concept to develop what was known as a rail gun.

Today's rail gun is a device that uses electromagnetic force to launch high velocity projectiles, by means of a sliding armature that is accelerated along a pair of conductive rails. It is typically constructed as a weapon, and the projectile normally does not contain explosives, relying on the projectile's high speed to inflict damage. The rail gun uses a pair of parallel conductors, or rails, along which a sliding armature is accelerated by the electromagnetic effects of a current that flows down one rail, into the armature and then back along the other rail. It is based on principles similar to those of the homo-polar motor.