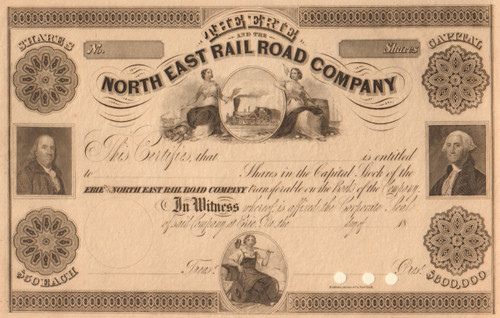 Amazing older train piece  with multiple vignettes - two classical female figures flank an early steam locomotive, Benjamin Franklin to the left, George Washington to the right, and a metal worker at the bottom. Unissued and cancelled. Circa 1852 from issued examples.

The Erie and North East Railroad was chartered April 12, 1842, to build the part from the state line west to Erie, PA, and opened on January 19, 1852. On November 16, 1853, an agreement was made between the two railroads, which had been built at 6 foot broad gauge, to relay the rails at standard gauge to match the Franklin Canal Company's railroad on the other side of Erie, and for the Buffalo and State Line to operate the Erie and Northeast. This would result in through passengers no longer having to change trains at Erie, and on December 7, 1853, the Erie Gauge War began between the railroads and the townspeople. On February 1, 1854, the relaying was finished and the first train passed through Erie. On May 15, 1867, the two companies between Buffalo and Erie merged to form the Buffalo and Erie Railroad.

The Erie and Pittsburgh Railroad was a railroad based in Erie, Pennsylvania incorporated on 1 April 1858. Operations began in March 1860. It operated jointly with Buffalo and State Line Railroad from an indeterminate date until 28 February 1870, in connection with the latter's commitment, along with the Erie and North East Railroad, to complete track construction between Jamestown, Pennsylvania, and Girard, Pennsylvania. The railroad was leased as of 1 April 1870, by the Pennsylvania Railroad.