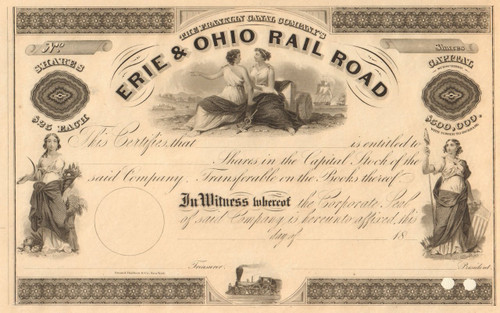 Uncommon antique stock certificate with four great vignettes - small steam train a t the bottom, classical female figure to the left, Lady Liberty to the right, and two seated females between river and sea ship scenes. Unissued and not cancelled.  Circa 1852 from company records.

Incorporated in 1848 but the company did not operate.  However, in 1852 the Franklin Canal Company completed a railroad from Erie to the Ohio State Line (taking the name of the Erie and Ohio Rail Road), connecting with a line from Cleveland. The first train from Erie to Ashtabula, Ohio, was run on November 23, 1852.

The change of gauge at Erie was a serious inconvenience to the railroads, and on November 17, 1853, the Erie & North East Company entered into a contract with the New York Central whereby the former was to alter the gauge of its track to 4 feet 10 inches, making a uniform gauge from Buffalo to Cleveland. The change, completed on February 1, 1854, enraged the people of Erie, who had visualized their city as the Lake Erie terminus of the New York & Erie Railroad instead of a way station.

Crowds of citizens, reinforced by Mayor Alfred King and 150 special constables, tore down the bridges over State and French Streets, ripped up the tracks across all streets east of Sassafras Street, and pelted officials of the railroads with rotten eggs whenever they appeared on the streets. Erie’s angered citizens were successful in preventing the changing of track gauge for a time, necessitating the transfer of passengers and freight between Harbor Creek and Erie by stages and wagons. Another outbreak occurred in 1855, in which several bridges were destroyed and tracks torn up. State and Federal officials were compelled to intervene. The controversy was carried eventually to the Supreme Court, which decided that the road gauge as constructed by the Franklin Canal Company was illegal, and repealed the company’s charter.