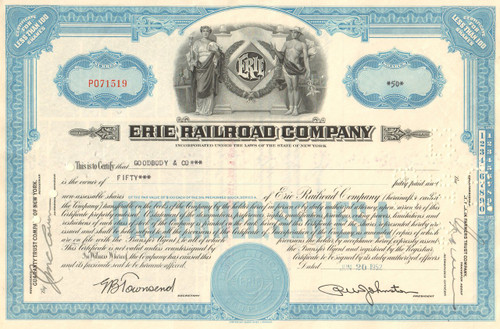 Very affordable piece of railroad history.  Great vignette of Greek god figures flanking a wreathed Erie logo.  This a nice novelty piece and great gift for the model train hobbyist or rail fan. Pieces dated from the 1940's throughout the 1950's.  This listing presents the uncommon Erie stock without holes in the vignette, making it great for display.

The Erie Railroad was a railroad that operated in the northeastern United States, originally connecting New York City with Lake Erie. It expanded west to Chicago with its 1941 merger with the former Atlantic and Great Western Railroad, also known as the New York Pennsylvania and Ohio Railroad. Its mainline route proved influential in the development and economic growth of the Southern Tier.

On October 17, 1960, the Erie merged with the former rival Delaware, Lackawanna & Western Railroad to form the Erie Lackawanna Railroad. It became part of Conrail in 1976. In 1983, Erie remnants became part of New Jersey Transit rail operations. Today, most of the former Erie Railroad routes are operated by Norfolk Southern Railway.

When the Erie Canal was built across upstate New York between Albany and Buffalo, DeWitt Clinton, governor of New York, promised the people of the Southern Tier of the state some kind of avenue of commerce by way of appeasement. William C. Redfield proposed a direct route from the mouth of the Hudson River to the Great Lakes, but it was Eleazar Lord who was instrumental in the chartering of the New York & Erie Railroad on April 24, 1832.

Ground was broken on November 7, 1835, near Deposit, New York. Shortly afterwards fire destroyed much of New York and wiped out the fortunes of many of the railroad's supporters; then a business panic struck the nation. Construction got under way in 1838, and the first train operated in 1841. The whole railroad from Piermont to Dunkirk was opened in May 1851 with an inspection trip for dignitaries including U.S. President Millard Fillmore, Secretary of State Daniel Webster, and others.

The NY&E came upon hard times in the 1850s. Cornelius Vanderbilt (the Commodore), and Daniel Drew both lent the railroad money, and in 1859 it entered receivership and was reorganized as the Erie Railway. Drew and two associates, James Fisk and Jay Gould, engaged in stock manipulations known as the Erie War, with the result that in the summer of 1868 Drew, Fisk, and Vanderbilt were out and Gould was in as president of the Erie. In 1874, the Erie leased the Atlantic & Great Western Railroad, which had been opened 10 years earlier between Salamanca, New York on the Erie, and Dayton, Ohio.

Hugh J. Jewett became president of the Erie in 1874. His first task was to lead the railroad through reorganization; it became the New York, Lake Erie & Western Railroad. On June 22, 1880, the entire system was converted to standard gauge. The railroad was bankrupt again by 1893 and reorganized in 1895 as the Erie Railroad. In 1899, Frederick Douglas Underwood began a 25-year term as president of the Erie. He had been associated with James J. Hill, and he was a friend of E. H. Harriman. Both Hill and Harriman had considered the Erie as a possible eastern extension of their respective systems. Underwood is remembered for rebuilding the Erie. His projects included double-tracking the remainder of the main line and building several freight bypasses with lower grades, making the line east of Meadville, Pennsylvania largely a water-level route.

During the eastern railroad strike of 1913, Underwood agreed to accept any ruling made by mediators under the Newlands Reclamation Act. One of the demands made by Erie employees was a 20 percent increase in wages. Erie management had refused a wage increase but compromised by asking employees to wait until January 1915 for any advance.

In the 1920s the Van Sweringen brothers began buying Erie stock, seeing the road as a logical eastern extension of their Nickel Plate Road. By the time they were done, they owned more than 55 percent of Erie's stock along with their interests in the Chesapeake & Ohio Railway, and Hocking Valley Railway.

The Erie held its own against the Great Depression until January 18, 1938 when it entered bankruptcy. Its reorganization, accomplished in December 1941, included swapping high rent for lower interest payments, and purchase of subsidiaries and leased lines. To the surprise of many, Erie began paying dividends. Prosperity continued until the mid-1950s, but then began to decline.

The business recession that occurred in the 1950s led the Erie to explore the idea of doing business with the nearby Delaware, Lackawanna & Western Railroad (DL&W). Successful business consolidations led to merger talks; on 1960, the two railroads merged to create the Erie Lackawanna Railroad.