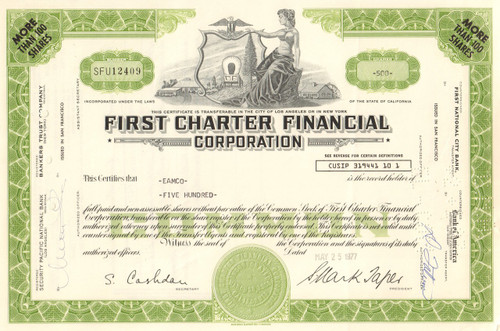 Wonderful and uncommon banking scandal stock. Elaborate vignette of seated and topless female figure holding a framed scene of an old covered wagon; background has several residential homes. Issued and cancelled in the 1970's and 1980's.

The chairman of Financial Corporation of America (parent corporation of American Savings and Loan Association) was convicted on loan fraud charges.  Backed by $2 billion in Federal aid, the Robert M. Bass Group signed a deal to acquire the nation's largest bankrupt thrift, American Savings and Loan Association. The bailout had in fact been brewing for some time. In 1984, the Stockton, California-based thrift reported a whopping 2nd quarter loss of $107.5 million, which triggered a $6.8 billion run on deposits.

Despite adopting an aggressive strategy to stem the losses, American Savings and Loan continued to flounder. With the thrift clearly in trouble, several buyers appeared, including the Ford Motor Corp. However, the Federal Home Loan Bank Board, which brokered the deal, shut the automaker out and opted to give the Bass Group and its reclusive billionaire chairman an exclusive shot at American Savings and Loan. The result was the most expensive bailout ever for a single Savings and Loan institution.