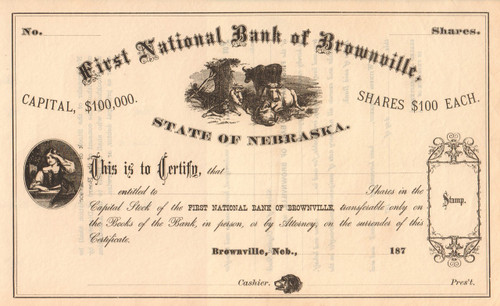 Nice older banking piece.  Great top vignette of cattle and boy farmer, female vignette to the left, and dog at the bottom. Dated 187_. Circa 1871 from company records.

Incorporated 1871 (charter as early as 1857 as the Bank of Lushbaugh and Carson) in Nebraska, the Brownville bank was located in Nemaha county. The bank went into voluntary liquidation with assets taken by the Carson National Bank of Auburn (NE) in 1887.

Brownville is a village in Nemaha County, Nebraska, United States. The population was 132 at the 2010 census. It is a small town in the southeast corner of Nebraska along the Missouri River. Established in 1854 and incorporated in 1856, Brownville was the largest town in the Nebraska Territory, with a population of 1,309 by 1880. Bordering slave-holding Missouri, the town became an important port on the Missouri River. Daniel Freeman, the first homesteader to file a claim under the Homestead Act of 1862, staked his claim at a New Year's Eve party in Brownville.

The rise of the railroad was ultimately Brownville's undoing. The railroads siphoned traffic away from the Missouri River's steamboats. Brownville's attempt to secure a railroad of its own was severely botched and led to immense tax increases to pay the bonds for the failed venture. This drove most of the population away and led to the county seat being transferred to Auburn in 1885. In 1856 Thomas Weston Tipton moved to the town to serve as a minister. He later became a longtime U.S. Senator, and ran an unsuccessful campaign for Governor of Nebraska. Omaha land magnates Herman and Augustus Kountze held large holdings in the early town.

After the Civil War David Mercer established a law practice in the town. Mercer later served as a long-time U.S. Representative from Nebraska. The Nebraska State Fair was held in the town in 1870 and 71. That year Eugene Gilmore, the future acting Governor-General of the Philippines, was born in the town.

The Brownville Bridge was built over the Missouri River in 1939. Today it is on the National Register of Historic Places. Owing to its place in Nebraska history, Brownville is primarily a tourist attraction with several old houses opened for tours or converted into museums. Art galleries and wineries in and near Brownville have also helped to make the town an increasingly attractive getaway for residents of the region's larger cities. Omaha's River City Star was built in the town in 1967, and was originally named the Belle of Brownville. The Governor Furnas Arboretum was planted in the city in 1992. The arboretum is named in honor of Nebraska's second governor, Robert W. Furnas, the signer of the first declaration of Arbor Day.