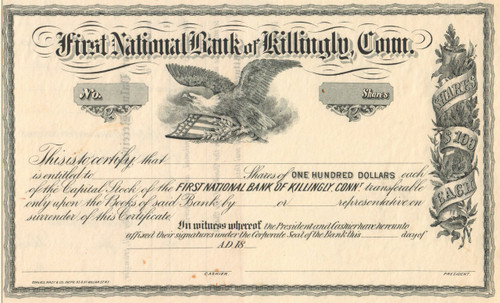 Great engraving of American eagle with the US shield.  Unissued and not cancelled. Circa 1864 from company records.  Dated 18__.

The First National Bank of Killingly (charter number 450) in Killingly, Connecticut in Windham county was granted a charter in 1864.  It commenced business June 2d, of that year, with a capital of $55,000. It commenced its banking business September 1st, 1864. Its officers then were Hon. Elisha Carpenter, president, and H. N. Clemons, cashier. It soon doubled its capital, making its limit $110,000, which remains unchanged at the present time. The first board of directors were Elisha Carpenter, Arnold Fenner, Henry Hammond, Abner Young, William Dyer, Harvey S. Bartlett, Edwin Ely, George Leavens, John Atwood. The president of the bank was the same as at the beginning until September 13th, 1864, when he removed to Hartford, and Arnold Fenner was elected to take his place.

The present board of directors were Henry Hammond, Abner Young, Silas Hyde, H. N. Clemons, William H. Chollar, William A. Johnson, Lorin Bates, R. R. James, T. E. Hopkins. July 2d, 1888, the bank paid its forty-fifth dividend. Up to that time it had paid to its stockholders in dividends $220,000, just double the amount of its capital. The amount of its deposits November 3d, 1888, teas $112,322.32. The bank occupied elegant rooms in the Music Hall building, on the second floor, over the post office.