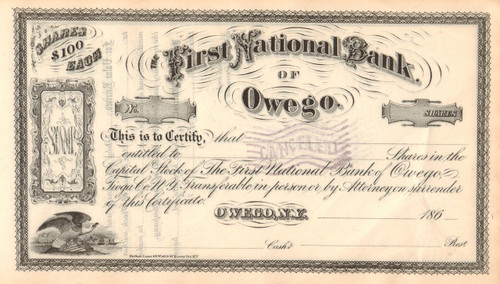 Uncommon NY banking piece with a nice eagle vignette at the lower left.  Unissued and cancelled. Blank ledger stub attached to the left. Printed date of 186_ but circa 1865 from issued pieces. Offered at a fantastic price.

Chartered in 1865, the Bank of Owego (New York) was the successor to the Bank of Owego (1855). President Lymon Truman was politician in the Tioga area. He entered politics as a Democrat, became a Whig in 1833, joined the Free Soil Party in 1848, and the Republican Party upon its foundation in 1855. He was Supervisor of the Town of Owego in 1849 and 1857. He was President of the Bank of Owego, later the First National Bank of Owego, from 1856 until his death.

Owego is a town in Tioga County, New York, USA. The name is derived from the Iroquois word Ahwaga, meaning where the valley widens.  The Town of Owego is in the southeast corner of the county. There is also a village of Owego in the western part of the town. Both town and village are west of Binghamton, New York.

The town was first settled around 1786. The "Original Town of Owego" was created at the time Tioga County was formed in 1791. This original town was reduced by formation of later towns in the county. The town's name is a derivative of the Iroquois word "Ahwaga," which means, "where the valley widens." This name came from the vast floods that run into the valley when the winter snows melt, which caused several deaths a year.  The current Town of Owego was formed as the "Town of Tioga" in 1800 from the Town of Union (now in Broome County).