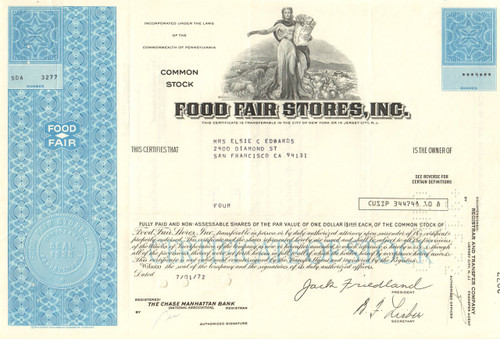 Excellent collectible grocery piece with a great vignette of aclassical female figure holding a bag of groceries in front of farming scenes with vegetables, sheep, and cattle.  The company logo is printed in the left border. Issued and cancelled. Dated in the 1970's.

Food Fair, also known by its successor name Pantry Pride, was a large supermarket chain in the United States. It was founded by Samuel N. Friedland, who opened the first store  in Harrisburg, Pennsylvania in the late 1920s. As of 1957, Food Fair had 275 stores, and at its peak, the chain had more than 500 stores. Friedland's family retained control of the firm through 1978, when the chain entered bankruptcy.

Samuel Friedland opened his first "Reading Giant Quality Price Cutter" supermarket in the 1920s. The success of the first store led to the opening of more stores. In the late 1940s came the introduction of the name Food Fair.

During the 1960s, Food Fair enjoyed great success, but the most significant purchase for the company was that of a small Philadelphia chain called Best Markets. Best's private label brand was called Pantry Pride. When Best Markets launched a chain of no-frills discount grocery stores in mid-decade, it used the name Pantry Pride. The stores that were under the "Pantry Pride" logo eventually became more popular than the "Food Fair" brand. By 1970, Food Fair had converted most of its stores to the Pantry Pride banner, and the company popularity grew further.

In 1978, Food Fair fell victim to financial problems. The company entered bankruptcy that year and a new management team, led by supermarket veteran Grant Gentry, began streamlining the 456-store, $2.7 billion company. By the end of 1978 the company took the first steps in the long journey out of bankruptcy by closing all of the JM Fields stores. Those stores were quickly purchased by Caldor, Jefferson Ward, and Kmart. In early 1979, the company left their home market of Philadelphia, where the firm was headquartered. The company closed more than 50 stores in the area, even though they were the second-largest chain in greater Philadelphia in terms of market share. Food-a-Rama bought 14 of the 48 Baltimore-area stores in 1981. By this time Food Fair had emerged from bankruptcy, and was based in Fort Lauderdale, Florida under the name Pantry Pride Stores, Inc. The company had entered into talks to be purchased by Pathmark Stores that same year, but discussions were abandoned when Pantry Pride's stockholders filed a complaint. Pantry Pride outsourced their wholesale operations to Supervalu when they sold their Miami and Jacksonville distribution centers. The company then began selling off huge chunks of their assets when they sold two-thirds of their remaining stores, including the last of their Richmond, Virginia stores to A&P, which continued to operate the stores under the Pantry Pride banner until 1986.Only about 40 stores in southern Florida remained.

In 1984 Pantry Pride acquired Devon Stores, a home improvement store, and the 400-store Adams Drug Company, which operated in the northeastern United States. The owner of Devon Stores, who obtained about 10.4% of the merged company, then sought an ouster of the Pantry Pride Board of Directors. In 1985, using junk bonds, 38% of Pantry Pride was acquired by investor Ronald Perelman. This was enough to acquire control, and Perelman liquidated their assets but kept the losses on the books to offset profits from MacAndrews and Forbes, which he had previously acquired. Perelman used Pantry Pride as a vehicle to acquire other companies, in particular Revlon. By 1986, the name of Pantry Pride was changed to Revlon Group.

In 1985, the last stores in southern Florida were sold to Red Apple Group, a New York supermarket chain owned by John Catsimatidis. By 1990, the chain was being supplied by the Fleming Companies. The last store opened in 1991 in Sunny Isles, Florida. By this time, nearly all of the stores were renamed Woolley's, after Bill Woolley acquired the latter named chain of seven stores in the late 1980s. In 1993, Fleming bought the Woolley's chain after a dispute with Catsimatidis. The remaining stores were either closed or sold by 2000.