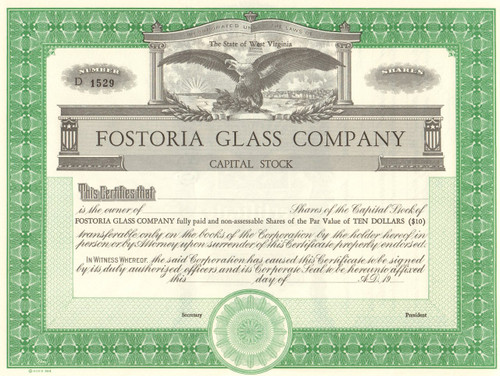 Nice eagle vignette on this collectible glassware stock.  Unissued and not cancelled. Circa 1950 from issued pieces.

The Fostoria Glass Company manufactured pressed, blown and hand-molded glassware and tableware for almost 100 years. It began operations in Fostoria, Ohio, USA, on December 15, 1887, at South Vine Street, near Railroad, on free land donated by the townspeople. When natural resources declined in Fostoria, the company moved to Moundsville, West Virginia, in 1891.

The Fostoria Glass Company was incorporated in West Virginia in July 1887.[2] The company was organized by men that had worked for the Hobbs, Brockunier and Company glass works in Wheeling, West Virginia. Lucian B. Martin was the first president. Other men in the original management team were William S. Brady, James B. Russell, Benjamin M. Hildreth, and Otto Jaeger. Former Ohio governor Charles Foster, son of the city of Fostoria's namesake, was included as a member of the board of directors.

Natural gas was a desirable fuel for glass manufacturing, and many firms were drawn to northwest Ohio during the 1880s to exploit this newly discovered resource. To take advantage of Ohio's gas boom, the new company's glass works was built in Fostoria, Ohio. The firm also received incentives of $5,000 to $10,000 cash. The factory’s furnace had a capacity of 12 pots, and originally employed 125 workers.

At least 20 glass employees relocated from Bellaire, Ohio, for the startup. These were experienced glass men such as Henry Crimmel and his brother Jacob, Hayes O’Neal, and Deacon Scroggins. Their work experience included glassmaking at the Belmont Glass Company and Hobbs, Brockunier and Company. Production began December 15, 1887, and products included tableware, bar goods, and lamps.[

Unfortunately for the area glass factories, Northwest Ohio's gas boom was short lived. Gas shortages started occurring during the winter of 1890–91. During April 1891, Fostoria Glass executives decided to move to Moundsville, West Virginia. Moundsville was selected because of the availability of coal as a fuel for the plant—and $10,000 cash offered by the community. The move was announced in September 1891. The Fostoria plant was sold to a group of investors led by Fostoria Glass executive Otto Jaeger, and his new company was named Seneca Glass Company.

In early December, the move to Moundsville was delayed by a temporary restraining order. Several members of the Crimmel family, who owned stock in the company, filed suit. (Charles Foster was not included in the legal action.) The Crimmels, who were also employees of the company, claimed shareholders should have been consulted for the move. The attempt to stop the move was unsuccessful, and the restraining order was lifted a short time later. The Fostoria Glass Company moved by the end of December 1891, and the Seneca Glass Company began operations January 1892.

The company's original Moundsville glass works had a furnace that could fire 14 pieces of glass at a time, considered exemplary for the period. During the early years of 1887 through 1909, Fostoria advertised that it manufactured "tableware, colognes, stationers' glassware and candelabra", as well as inkwells, sponge cups, vases, fingerbowls and fruit jars. Many of the stemware designs were needle etched or wheel cut, popular styles during the early 20th century.

By 1925, five additional furnaces were added and the company was in its heyday, manufacturing stemware, container glass, and decorative lamps, before adding a colored stemware and dinnerware product line. Fostoria struggled through the Great Depression and World War II, but survived, producing milk glass and depression ware, and the notable patterns of Chintz (1940), Colony (1940), Romance (1942), and Holly (1942). .

Production peaked in 1950 when Fostoria manufactured over 8 million pieces of glass and crystal. The company expanded in the 1950s, adding the crystal patterns Century (1950), Rose (1951), Wedding Ring (1953), and Jamestown (1959). In the 1960s and 1970s, the company's marketing campaign expanded to include boutiques and display rooms within jewelry and department stores. In addition, Fostoria published its own consumer direct magazine, "Creating with Crystal" during this period. All U.S. Presidents from Dwight D. Eisenhower through Ronald Reagan ordered glassware from Fostoria. Foreign competition increased during the 1970s. In 1983, Fostoria sold its factory to Lancaster Colony Corporation of Columbus, Ohio. By 1986, Lancaster Colony closed the factory and sold the remaining stock directly to consumers.

Fostoria stemware and dinnerware continue to be popular collector items, with colored pieces valued higher than clear ones of the same pattern. Earlier American pieces are more valuable than later ones.