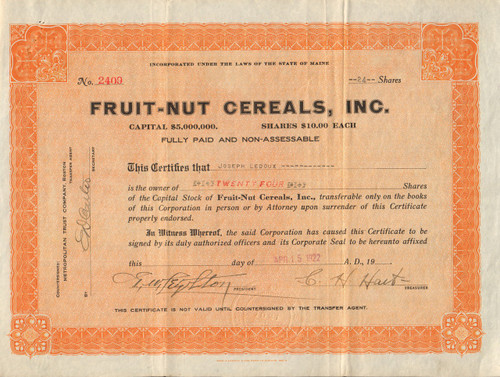 Great early breakfast cereal stock certificate, Incorporated in Maine, established 1917.  Apparently a high fiber food, it was promoted as a laxative and constipation relief. Issued and not cancelled. Dated 1922.

Originally introduced in the city of Somerville, Mass., by the discoverers of the food, the sales were gradually extended to the surrounding towns and finally covered all New England. Leading grocers everywhere are carrying the product. With ample facilities in the contemplated new factory for supplying a still larger section of the country with Fruit-Nut Cereal, immediate steps were  taken to grip the entire country with this product.

These people must eat. Whatever else they buy they must buy things to eat, and the Fruit-Nut Cereal made of whole wheat, bran, malt, figs, raisins and walnuts, -makes a happy combination that looks well, tastes well, nourishes the body, satisfies the appetite and constitutes a breakfast cereal of extraordinary merit. The sales since the inception of this company some 4 years ago have steadily grown, the bulk of it being unsolicited, yet the company has never been able to keep up with their orders. Possessing laxative features, Fruit-Nut Cereal sprung into instant favor with physicians who recommended it for the relief of constipation, and this virtue in the food became widely talked about, adding greatly to its sales. The company has testimonials from hundreds of physicians endorsing the cereal and many of these physicians buy the cereal for the use of their patients when it is not to be procured locally. The inception of this business began in a very small way.

About four years ago G. W. Leighton, the present President and General Manager and W. W. Damon of Somerville began making this new food, pushing it in a very modest way. The manner in which the company's business has increased j from these humble beginnings has attracted the attention of the business world. The profit possibilities of an exclusively controlled article of meritorious and superior character used by practically everybody are well known, and this product is one of those articles. Fruit-Nut Cereal wins public approval. In every instance Fruit-

Nut Cereal has not only found immediate popularity but repeat orders exceed the originals. This shows Fruit-Nut Cereal a quality product, strong in public demand. Fruit-Nut Cereal has expanded rapidly and through the wise selection of first class grocers to ban- j die the product, the food wherever introduced has made a hit and come to stay. Unquestionably when the company inaugurates a national advertising campaign it will be swamped with orders.