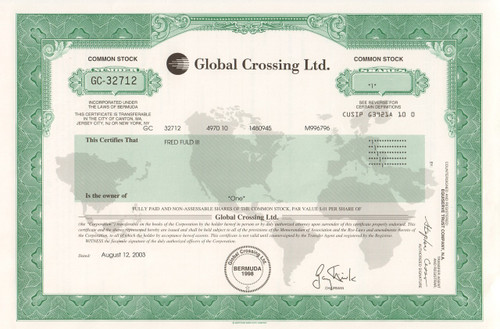 Rare scandal stock certificate. Nice under print of a map of the world and a vignette with the company logo. Issued and not cancelled 2003. Clean and crisp example

Global Crossing was a telecommunications company that provided computer networking services and operated a tier 1 carrier. It maintained a large backbone network and offered peering, virtual private networks, leased lines, audio and video conferencing, long distance telephone, managed services, dialup, colocation centres and VoIP. Its customer base ranged from individuals to large enterprises and other carriers, with emphasis on higher-margin layered services such as managed services and VoIP with leased lines. Its core network delivered services to more than 700 cities in more than 70 countries.

Global Crossing was the first global communications provider with IPv6 natively deployed in both its private and public backbone networks. It was legally domiciled in Bermuda, although its administrative headquarters was in New Jersey.

Barry Porter. In 1997, the company raised $35 million, including investments by Winnick and the CIBC Argosy Merchant Funds (later Trimaran Capital Partners). CIBC later realized an estimated gain of $2 billion from its relatively small equity investment in the company, making it one of the most profitable investments by a financial institution in the 1990s. Winnick salvaged $735 million from his $20 million investment, although his interest was worth $6 billion on paper at its peak.

Winnick was chairman of the company from 1997 until 2002. In 1998, he hired Lodwrick Cook, former CEO of Atlantic Richfield Company, as co-chairman. John Scanlon became the first CEO of the company in the same year, but was replaced in March 1999 by Robert Annunziata, who had resigned as president of AT&T Corporation's Business Services group to "build a company from start to finish". In May 1999, the company made an offer to acquire US West. However, the company was outbid by Qwest.

In 1999, during the dot-com bubble, the company was valued at $47 billion.However, the company never had a profitable year. In 2002, the company filed for one of the largest bankruptcies in history and its executive were accused of covering up an accounting scandal. On October 3, 2011, the company was acquired by Level 3 Communications for $3 billion, including the assumption of $1.1 billion in debt.