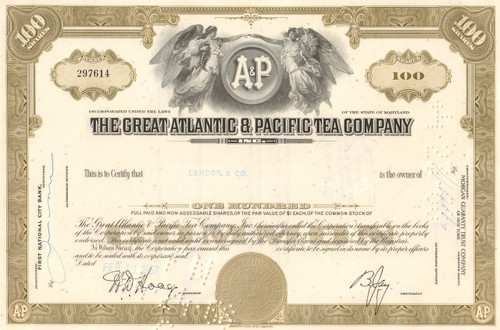 The Great Atlantic & Pacific Tea Company, better known as A&P, is a supermarket and liquor store chain in the United States. Its supermarkets, which are under six different banners, are found in Connecticut, Delaware, Maryland, New Jersey, New York, and Pennsylvania. A&P's liquor stores, known as Best Cellars, are found in Connecticut, Massachusetts, and New Jersey. A&P's corporate headquarters are in Montvale, New Jersey. Supermarket News ranked A&P #28 in the 2012 "Top 75 Food Retailers and Wholesalers" based on 2012 fiscal year estimated sales of $6.7 billion. Based on 2009 revenue, A&P was the 34th largest retailer in the U.S. From 1915 through 1975, it was the largest food retailer in the nation (until 1965, the largest U.S. retailer of any kind). A&P is considered an American icon. The Wall Street Journal, in a blog post on December 10, 2010, said that "A&P was as well known as McDonald's or Google is today" and that A&P was "Walmart before Walmart."

What is now A&P began in 1859; it established a small chain of retail tea and coffee stores in New York City and a national mail order business. It grew to 70 stores by 1878. In the late 19th century, A&P, still a tea and coffee company, became the country's first grocery chain. At the turn of the century, it operated almost 200 stores. The company grew dramatically after introducing the economy store concept in 1912, growing to 1,600 stores in 1915. After World War I, the company opened stores offering meat and produce. In 1930 the company, now the world's largest retailer, reached $2.9 billion in sales with 16,000 stores. In 1936, A&P adopted the self-serve supermarket concept and opened 4,000 larger stores by 1950.

A&P's decline began in the 1950s when it failed to keep pace with chains which opened larger, modern supermarkets with features demanded by customers. By the 1970s, A&P stores were out of date; its efforts to combat high operating costs resulted in poor customer service. In 1975, the company hired outside management, closing older stores and building modern ones. When these efforts failed to turn the company around, the heirs of the original owners, and the foundation that owned a majority of the stock, sold to the German Tengelmann Group. A&P then launched a store-closing program financed by the surplus assets of its pension plan.

Starting in 1982, A&P acquired several chains; these stores operated through their names rather than "A&P". While A&P regained profitability in the 1980s, in 2002 it operated at a record loss because of new competition, especially Walmart. A&P closed more stores, which included the sale of its large Canadian division. In 2007, A&P purchased Pathmark, one of its toughest competitors; A&P again became the largest supermarket chain in the New York City area. Highly leveraged after this acquisition, the company experienced financial difficulties because of the recession and filed for Chapter 11 protection in 2010. In late 2011, A&P implemented a restructuring plan to emerge from bankruptcy. On March 13, 2012, it was announced that A&P had emerged from bankruptcy, becoming a private company.

A&P's struggles continued; on July 19, 2015, it again filed for Chapter 11 bankruptcy. The company has announced plans to close 25 stores, will sell about 100 others, and is planning to sell off the company's remaining stores.