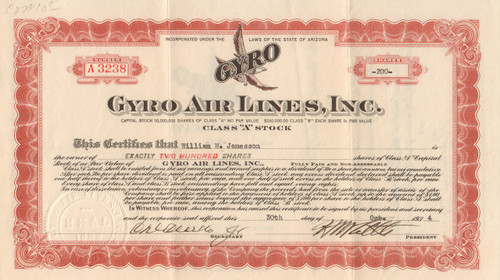 Rare aviation stock certificate with a nice vignette of an eagle under the company's stylized logo.  Incorporated in Arizona.  Issued and not cancelled, dated 1934. Smaller certificate measuring 6" x 10".

The company was a small Denver airline that wanted to feature the use of its American Gyro Crusader.  The Crusader was a small, futuristic airplane that astonished and amazed the aviation world during the Great Depression. Its magic touched the hearts and minds of all who came to know it, including luminaries like William Randolph Hearst, Jr.; Amelia Earhart; and Howard Hughes. Its rich story ranged from aeronautical inspiration, to courtroom drama and business intrigue. Was it also the victim of industrial espionage and governmental collusion?  The company was unable to raise funds and went bankrupt

The prototype was painted copper colored with green leather seats. It was tested in 1935 at Denver Colorado. The aircraft was funded from stock issue in the Crusader Aircraft Corporation, a parent of the American Gyro Company. The company folded in 1938 under securities fraud investigations before the Crusader could go into production.