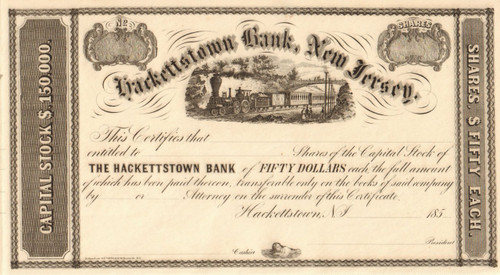 Hackettstown is a town in Warren County, New Jersey, United States. As of the 2010 United States Census, the town's population was 9,724. The town is located in the eastern most region of the Lehigh Valley. Hackettstown was incorporated as a town by an Act of the New Jersey Legislature on March 9, 1853, from portions of Independence Township. Portions of territory were exchanged with Mansfield Township in 1857, 1860, 1872 and 1875.

Hackettstown houses the headquarters of Mars Chocolate USA, the American division of Mars, Incorporated, makers of Milky Way, Mars, M&M's, Twix and Snickers candy bars, as well as pet foods (such as the well-known Whiskas and Pedigree brands), human foods (including Uncle Ben's) and non-confectionery snack foods (including Combos).

It is believed that Hackettstown was named after Samuel Hackett, an early settler and large landowner. Hackett is said to have "contributed liberally to the liquid refreshments on the christening of a new hotel, in order to secure the name which, before this, had been Helms' Mills or Musconetcong".