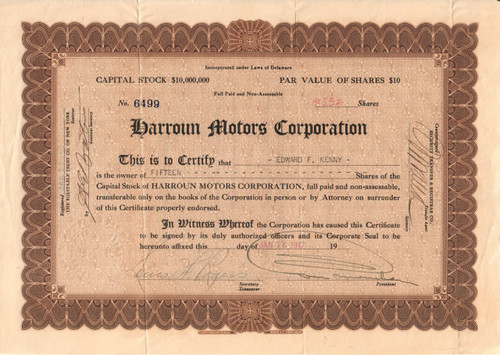 Harroun Motors was a famous early automobile manufacturer started by Ray Harroun, the first man to win the Indianapolis 500 mile race in 1911. The Harroun was manufactured in Wayne Michigan between 1917-22. By 1927, the Graham-Paige Motor Corporation bought the Harroun Motors Plant and enlarged the structure and began the production of automobile bodies.

Ray Harroun (January 12, 1879 - January 19, 1968)
Born in Spartansburg, Pennsylvania, . He got his elementary education there, but could not concentrate on classroom work. He built his first car in 1905, and would race anyone who would challenge him. he was the AAA season champion in 1910. In 1910, Harroun accepted an offer from Howard C. Marmon to design and build a racing car to be driven by him in the first big event at the new speedway at Indianapolis.

Conventional cars at the time were constructed with two bucket-type seats. Harroun's car had a streamlined body, with only one seat for the driver. Since he would not have a riding mechanic to watch for overtaking vehicles, Harroun constructed a bracket to support a rear view mirror - perhaps, the first. Consequently, the automobile industry started equipping their cars with rear view mirrors.
At the first Indianapolis 500 in 1911, his use of what would now be called a rear-view mirror, rather than the riding mechanic specified in the rules, created controversy, but was ultimately allowed. On May 30, 1911, the first Indianapolis 500 mile racing contest was held. This Marmon Wasp, driven by Ray Harroun, won that first "500" in 6 hours, 42 minutes and 8 seconds at an average speed of 74.602 mph. Harroun's win created another controversy; to this day, some say a scorer's error cheated Ralph Mulford of his rightful victory. Harroun, who came out of retirement to race in the first 500, would never race again.

The 1911 Indianapolis "500" purse amounted to $27,550, of which Harroun earned $14,000. The Marmon Company let Harroun keep it all, plus a bonus. On the day the award was given, Ray Harroun announced his retirement from driving but not from the automobile business. Harroun was retained as a consulting engineer, for several years. He designed and developed the Harroun carburetor for the 1913 Marmon "48".

Harroun designed and built three Maxwell racing cars for the 1914 and 1915 seasons. The success of the Harroun-Maxwell cars was self-evident by the number of prominent races won by drivers Willie Carlson, Teddy Tetzlaff and Hall of Famer Eddie Rickenbacker.

During 1916, Harroun rented an office and drafting room space, and proceeded to design an inexpensive, but reliable roadster. In early 1917 Harroun leased a small plant in Wayne, Michigan, formerly used by a buggy and carriage manufacturer. Approximately 500 roadsters were built in this plant during 1917. On September 14, 1917, the Harroun Motors Corporation was incorporated for ten million dollars. While waiting for their 24,000-unit-per-year factory to be built, the Harroun Company took possession of the former Prouty and Glass Carriage Company. It is believed that the slow settlement by the government for munitions Harroun had made, and not finding new investors in the wake of the post-war recession, may have dealt the end to the Harroun Motors Corporation in June 1922.

The Marmon Motor Car Company failed in 1933, Harroun died in 1968, but the Wasp, named for its yellow and black paint job, survives at the Speedway Hall of Fame Museum located at the track.