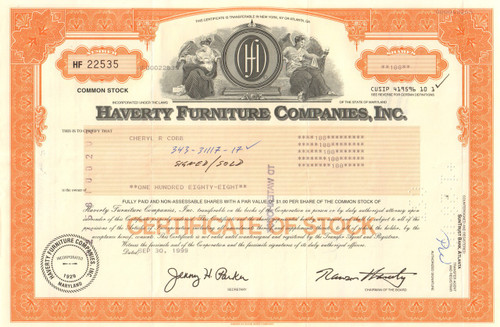 Haverty Furniture Companies, Inc. is a retail furniture company founded in 1885. Beginning with a single store in downtown Atlant, Haverty's has grown to become one of the top furniture retailers in the south and central United States. Haverty's Furniture was founded by James Joseph (J.J.) Haverty and his brother Michael in 1885. The first store was located at 14 East Hunter Street (now 117 Martin Luther King Jr. Drive) in Atlanta, Georgia. By the third year, the new company moved to a larger location.

In 1889, J.J. and Michael entered a partnership with the owner of a neighboring furniture store, Amos G. Rhodes, forming the Rhodes-Haverty Furniture Company. A year and a half after the first Rhodes-Haverty store opened, J.J. Haverty moved westward to St. Louis, Missouri with his family to expand, and soon after bought interest in a number of smaller showrooms. It wasn't until 1894 that J.J. returned his family back to Atlanta and went on the road to open more stores. By 1908, 17 stores were open and thriving.

J.J. Haverty's son Clarence, who first began in the business by sweeping floors, rose to a leadership position and wished for a larger role in the business. The partnership with Rhodes was dissolved amicably and, with a flip of the coin, 16 of the stores were divided between Rhodes and Haverty. The main Atlanta location was purchased outright by J.J. Haverty and the business took back its original name of Haverty Furniture Company.

Following the split with Rhodes, the company expanded across the South. The Atlanta headquarters outgrew their facility and moved to a larger six-story building in 1924. Also during this period, J.J. Haverty and Amos Rhodes formed another partnership, this time to erect the Rhodes-Haverty Building, which would remain Atlanta's tallest structure until 1954. In the late 1920s, the company took advantage of the booming stock market and went public. The stock sale took place on October 1, 1929. Four weeks later, the market crashed. Haverty's strong financial positions enabled the company to weather the difficult years ahead.

Clarence Haverty, who had run the business for many years, was officially named President in 1938, at which time his father J.J. became Chairman of the Board. In October 1939, just short of his 81st birthday, founder J.J. Haverty died.

In December 1941, the United States entered World War II and the company faced hard times brought on by the rationing of furniture production materials. When the war ended, pent-up demand for consumer goods caused sales to surge. The company seized the opportunity to remodel older stores and open new locations. Clarence Haverty's son, Rawson, returned from war and assumed the position of Corporate Secretary.

The company continued to prosper during the 1950s. By 1955, there were 38 stores across ten states. Clarence Haverty decided to step down as President and Rawson took on the role. By 1960, the year of the company's 75th anniversary, Haverty's added four more locations. That year also saw the passing of Clarence Haverty at the age of 79.

By the end of the 1960s, retail trends were changing and downtown stores were replaced by stores closer to the growing suburban populations. Rawson Haverty led the company through this transition as President and Chief Executive Officer until 1984, when he was elected as Chairman of the Board. Another one of the founder’s grandsons, Frank McGaughey, Jr., who had been with the company since 1947, accepted the title of President.

In the late 1980s, Haverty's embarked upon a comprehensive revitalization program, upgrading most of the company's stores. Enhanced lighting and display areas were the primary improvements, with some stores also expanding in size. The revitalization included closing the last downtown Atlanta store. Haverty's remained the area's largest furniture retailer, with locations distributed throughout the metropolitan area.

Frank McGaughey, Jr. added CEO to his title in addition to President in 1990. He held this post until his retirement in 1994, when John E. Slater was named President and CEO. Slater joined the company in 1956 and had spent his entire career with Haverty's.

In August 1998, the company's stock listing moved from the NASDAQ Exchange to the New York Stock Exchange. As Haverty's witnessed the turn of another century, the company underwent many changes. An initiative began to develop Haverty's own brand of furniture, starting with just a few items in February 2000. Most of the company's sales is now of merchandise exclusively designed, sourced and produced under the Haverty's brand.

Progress continued and 100 stores were in business by the beginning of 2001, when the furniture retailer saw another change in leadership. Rawson Haverty retired from the board and took the title Chairman Emeritus. Grandson of J.J. Haverty, Clarence (Clancy) H. Ridley, elected to the board of directors in 1979, took Rawson's place as Chairman of the Board. Clancy provided continuity and guidance when J.J.'s great grandson Clarence H. Smith, who spent his entire career experiencing all facets of the company, became President in 2001. In January 2003, Clarence H. Smith was then named CEO. Rawson Haverty continued to attend Board meetings until his death in 2007 at the age of 86. Frank MaGaughey, Jr. followed soon after in 2008 at the age of 84.

Growth of the internet presented Haverty's with another opportunity and in 2007 the company revamped the website. By March 2008, customers could browse through products and make purchases online.