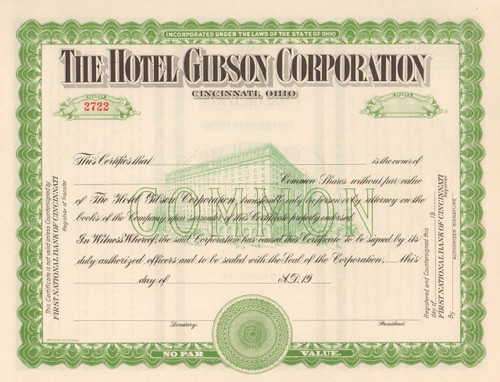 Great stock cert with underprint of the hotel.  Unissued and not cancelled. Circa 1914 from issued pieces.

The Hotel Gibson, later the Sheraton Gibson, is a demolished hotel that was located at the southwest corner of Fifth and Walnut streets in downtown Cincinnati, Ohio. It was originally the site of the Gibson House, which was constructed in 1849 by Peter Gibson.1

In 1914, a 15-story hotel, designed by Gustave W. Drach,2 was constructed on the site of the Gibson House and expanded in 1922 when the Johnston Building (circa 1875) was demolished. Hotel Gibson was known for Yeatman’s Cove bar and the upscale Florentine Room that remained until a 1973 remodel when it became Kon Tiki, a Polynesian-themed casual eatery.

In late-1973, the hotel began refusing reservations and in March 1974, ITT-Sheraton, Hotel Gibson’s parent company, closed the facility. It was demolished in 1977 1 for Fountain Square South that consisted of a Westin and Firstar Bank.

The Gibson House was opened about February 1849 on Walnut Street between Fourth and Fifth Street, on the west side of the street, in Cincinnati, OH. The first proprietors were J.K. and D.V. Bennett. It was considered the "best house in the city" within a year. The hotel was financed by Peter Gibson, a Scottish immigrant who was born October 20, 1802, and emigrated to America in 1831. Many wall decorations and frescoes were painted by the artist William A. Thien, who lived in Cincinnati for a time.During World War II, Gibson House was used as an internment camp for German-Americans.