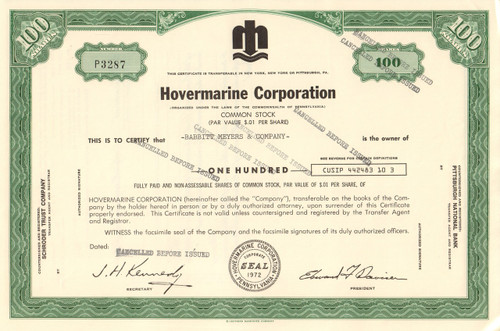 Hovermarine was formed in 1965 and displayed at Hovershow '66 sidewall hovercraft with 30 to 60 seat capacity together with larger (car carrying) craft upto 300 tons. A licence for the use of HDL patented features was granted early 1967 with the prototype being completed in January 1968. In late 1967, Hovermarine tookover the Hovercat developed by the Manx Hovercat company.

The early HM2 suffered from mechanical problems and during a financial crisis in 1969, Hovermarine went into voluntary liquidation and the major assets were acquired by a new company, Hovermarine Transport Ltd, this was subsequently taken over by the American company,Transportation Technology Inc. Production of HM.2s for North and Central America was undertaken by Hovermarine's factory at Titusville, Florida. Over 110 HM.2's were manufactured in the UK and US