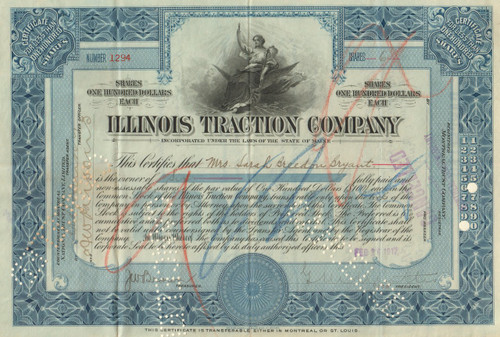 Uncommon electric railway piece with a vignette of a classical female figure holding up an electric bulb and lightning bolts at her feet. Heavy pen cancellation marks as shown. Issued and cancelled.  Dated 1920's.

What ended up as the Illinois Terminal was the dream of William McKinley, which began purchasing streetcar systems in Illinois as early as the late 19th century and operating them under the name, Illinois Traction System. McKinley had hopes of stretching his system of interurbans to Chicago but only ever made it as far north as Peoria. Still, he was able to put together an impressive webbed system of lines in central Illinois. What transpired into the IT began in 1925 when Illinois Power & Light was formed by the Illinois Traction Company (which was also the parent of ITS) to oversee the company’s rail assets.

The IP&L then purchased two small railroads the St. Louis, Troy & Eastern and St. Louis & Illinois Belt.  Curiously incorporated in Main in 1896, the Illinois Terminal Railroad, known as the Illinois Traction System until 1937, was a heavy duty Illinois from 1896 to 1982. When Depression era Illinois Traction was in financial distress and had to reorganize, the Illinois Terminal name was adopted to reflect the line's primary money making role as a freight interchange link to major steam railroads at its terminal ends Peoria, Danville, and St. Louis. Interurban passenger service slowly was reduced, and it ended in 1956. Freight operation continued but was hobbled by tight street running in some towns requiring very sharp radius turns. In 1986, ITR was absorbed by a consortium of connecting railroads.

ITR was a successor in interest to a series of Alton interurban line bought by the Illinois Traction System in 1928. Because the Illinois Traction/Illinois Terminal traversed some towns on street trackage with very tight turns, freight operation required the use of short trains and special hardware. New bypass trackage was constructed around some towns for freight operation to partially solve this problem. Springfield was an example of this. In a few other towns, arrangements were made with a parallel steam railroad for trackage rights in order to provide a bypass. An example of annoying town running (for the town as well as the railroad) was at Morton, Illinois, just east of Peoria, where a heavy duty well maintained track with trolley catenary suddenly found itself running down the center of the town's brick paved main street.