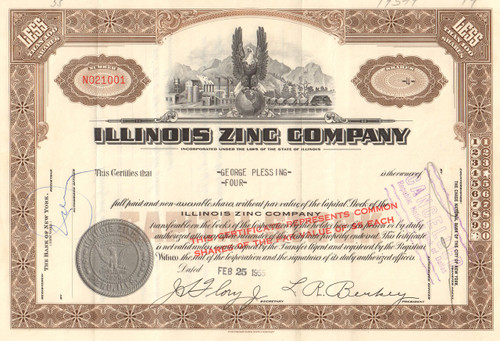 Great vignette of eagle on a globe with factory and mining scenes in the background. Issued and cancelled. Dated 1955.

The Illinois Zinc Company had operations in Peru, Illinois (West of Chicago) where it both mined and refined zinc ore.   It sold the operation to one of its subsidiaries, Peru Mining, which in turn sold it to the American Zinc Company (of Missouri).

Since the first steamboat, “Traveler” reached Peru in 1831, Peru had high hopes of being the western terminus for the Illinois & Michigan Canal. That designation went to LaSalle, but Peru became a busy steamboat port at the head of navigation on the Illinois River. Captain McCormick was involved in the Five Day Line, making record fast trips between Peru and St. Louis. Senator Gilson reported to land surveyor, Grenville Dodge that the town would soon outstrip Chicago due to its favorable location along the river and railroads.

Water Street was a thin ribbon sandwiched between the bluff and the river and a large industrial district grew up to the east. It was along the river and the canal and was serviced by the Rock Island Railroad and Chicago Burlington and Quincy. These important transportation routes, along with coal mining in at least four mines lasting from at least 1857 until 1949,prompted Peru's rise to and industrial center. Many entrepreneurs grew into prominent businessman and advanced the interests of Peru and the region. Prominent Companies from that time included Maze Lumber, Maze Nails, Peru Plow and Wheel Works, Huse and Loomis Ice Co, Brunner Foundry, Star Union Brewery, Hebel Brewery, Illinois Zinc (Peru and LaSalle were sometimes referred to as "Zinc City") and many others. Peru's citizens were bent on improving their town even constructing a plank road, northwest of town, a toll road meant to reach Dixon, Illinois.

Peru is the home of at least three very old companies. They are the national headquarters of American Nickeloid, started in 1898 and the W.H. Maze Co, dealing in lumber and nails, which started the year the Illinois and Michigan Canal opened in 1848. Maze nails is America's last nail maker. Peru is home to the offices of Carus Chemical Company, started in 1915, today the largest manufacturer of potassium permanganate in the world.