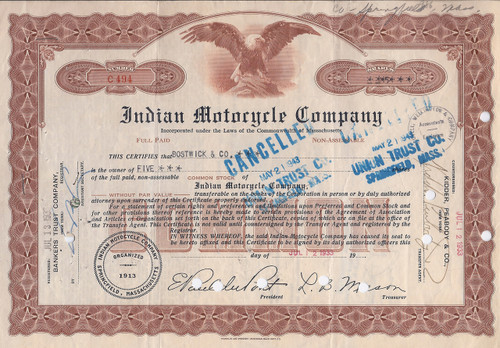 This is a very rare Indian Motorcycle stock certificate which are extremely hard to find. Most of the stocks were either destroyed or now in the Indian Motorcycle Museum. Brown border and eagle vignette. Cancelled as shown. Incorporated 1913 in Springfield, Massachusetts. Date of issue: July 12, 1933.

The Indian Motorcycle Manufacturing Company was a motorcycle manufacturer in Springfield, Massachusetts. Indian was America's oldest motorcycle brand and was once the largest manufacturer of motorcycles in the world. The most popular models were the Scout, made prior to WWII, and the Chief, which had its heyday from 1922-53.

E. Paul duPont started Dupont Motor Car Company in 1919, with their premier at 1919 International Automobile Salon in the Commodore Hotel in New York City. The first cars sold for $2,600. Dupont suffered during the Depression, though, and went bankrupt in 1932. The DuPont company was merged with the Indian Motorcycle Company and E. Paul Dupont took over as President.

At the turn of the century a young self-taught engineer and builder of racing bicycles named Oscar Hedstrom designed and built a "pacer" bike, an engine-powered two-wheeler used to train bicycle racers. Powered by a copy of the DeDion-Buton engine, with an excellent carburetor of Hedstrom's own design, the little machine was so practical and reliable that it attracted the attention of a Springfield entrepreneur, George Hendee. They built a manufacturing plant, tooled up, and the first Indians rolled out the door in 1902.

Indian struggled along until 1930, when industrialist, engineer and motorcycle enthusiast E. Paul DuPont took control of the company, which he would run for the next 15 years. Realizing that motorcycles were no longer considered basic transportation, DuPont shifted Indian’s focus to leisure motorcycling.  After the DuPont sold his interest in Indian in 1945, the firm managed to survive for another eight years before a combination of poor management, antiquated engineering and stiff competition from Harley-Davidson and British imports finally closed the Wigwam for good.